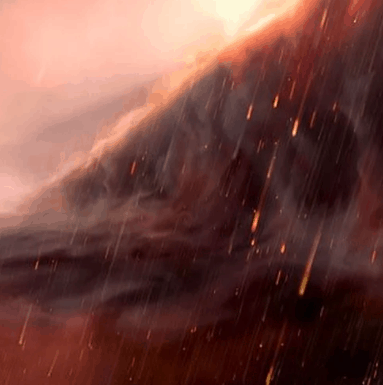 In the irascible search for life

the faint twinkling of distant

drifting too close to their sun,

a labyrinth of tidal force.

As the searing heat

carried by Khamsin to

as a cooling balm of

This poem was inspired by recent research, which has observed a distant exoplanet over 600 light years away from Earth, where the temperatures are so high that it rains iron.

The Wide Angle Search for Planets (or WASP) is an international collaboration that involves searching for planets outside of our solar system (i.e. exoplanets), using the transit method of detection. This method involves measuring the light from distant stars and looking for periodic dips in brightness, which are the result of exoplanets passing in front of the star (i.e. transiting) relative to the observer. In 2015 the exoplanet WASP-76b was discovered using this approach, during which time it was classified as a ‘hot Jupiter’. These exoplanets are gas giants that are thought to be physically similar to Jupiter (the largest planet in our solar system), but which have very short orbital periods and are thus much closer to their star than Jupiter is to our sun.

In this new study, researchers observed that WASP-76b only ever shows one face, its day side, to its parent star, with its cooler night side remaining in perpetual darkness, thereby resulting in different day-night temperatures. As a result, they also found that WASP-76b has distinct day-night chemistry, with iron vapour abundant in the atmosphere of the hot day side of the exoplanet, where the temperatures are so hot that molecules separate into atoms, and metals like iron evaporate into the atmosphere. A fraction of this iron is injected into the night side owing to the exoplanet’s rotation and atmospheric winds. There, the iron encounters much cooler environments, condenses and falls as rain. This research demonstrates that it is now possible to trace the climate of even the most distant and extreme exoplanets, which will ultimately help us to better understand our Universe and how it formed.

2 thoughts on “Beneath an Iron Sky”