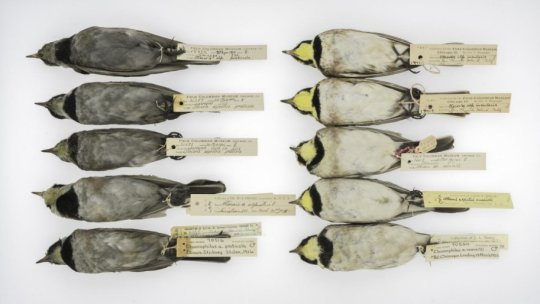 When gliding through our old and rusty skies,

You filtered out the wheezing, blackened air;

A century of progress built on lies,

Now captured in the feathered down you wear.

The smut and ash th­­­at billowed from our hearth,

Concealed the dirty secrets of our past;

So, when you flew no more and fell to Earth

You kept a distant record that would last.

For decades, you were kept in see-through tombs,

Until we thought to gauge our antique fumes,

By judging how your forms reflected light.

When future selves repeat what we have done,

How will they judge the tapestry we spun?

This is a Shakespearian Sonnet, inspired by recent research that used the soot found on birds displayed in museums to track environmental pollution over the last 135 years.

As well as being a major contributor to climate change, black carbon (or soot) is also extremely dangerous for human health, and mapping its historical trends is important to develop more accurate models for future atmospheric predictions. However, current estimates of soot from before the 1950s are highly variable, as there is limited environmental sampling before this time. Researchers have therefore developed an innovative way of monitoring the historical variability of soot, by taking photographs of birds that were collected over this period, and which are now stored in museum collections. Many of the older bird specimens were much darker than they should have been, an effect that was caused by increased levels of soot in the atmosphere, with the birds acting as “air filters” and picking up the soot as they flew though the skies.

By photographing the birds and measuring the light reflected off of them, the researchers were able to use this as a proxy to monitor how the soot had changed over the US Manufacturing Belt (an area in the northeastern USA that was historically reliant on coal and industry) from 1880 to 2015. Using this method, the researchers discovered that the amount of soot on the birds closely tracked the use of coal over time, and that atmospheric soot concentrations peaked during the first decade of the 20th Century, with major dips following the Great Depression and after World War 2, when residents started using gas rather than coal to heat their homes. This paper represents a novel way of using natural history collections to improve our knowledge of humankind’s impact on the natural world.