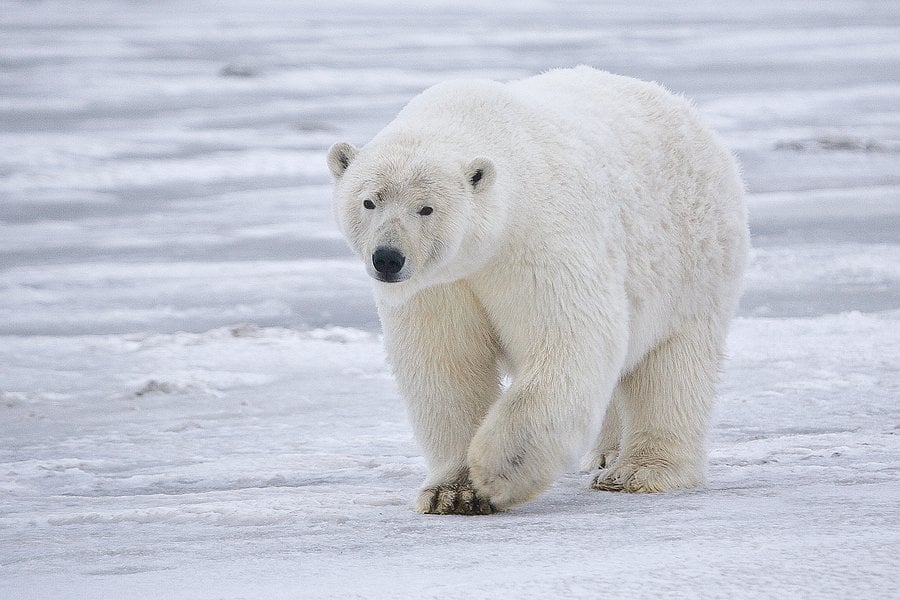 Across white fields of mounting snow

You sense the winds begin to slow,

Then feel them bite into your side;

Your ashen snout will be your guide

Amongst the zephyr’s gentle flow.

You glide along because you know

That in the distance far below

A ringed seal has been supplied —

You track its movements high and low

And shift your stride because you know

That even though it can’t be eyed

The air’s embrace has never lied.

A fragrant glint, a sweet shadow.

This is a Rondeau, inspired by recent research that determined how polar bears used the power of the wind to search for their prey.

Polar bears are olfactory predators, which means that they search for prey using odours carried on the air, and given the correct wind conditions they are able to smell a seal from more than 30 km. It had previously been hypothesised that such predators amplified their success rate by travelling crosswind (i.e. at right angles to the wind’s direction), as this maximises the area that they are able to sense through smell. By using satellite tracking data collected from 123 adult polar bears in Canada’s Hudson Bay region over 11 years, the researchers in this study cross-referenced the movements of the polar bears with measured wind patterns, revealing that this hypothesis was indeed correct.

Previous studies have revealed that insects use a similar approach to search for the chemical ‘smell’ of prey or potential sexual partners. However, these research findings represent the first quantitative description for a large carnivore of anemotaxis, i.e. the oriented movement in response to a current of air. This research indicates that the behaviour of the wind in a specific region may play a part in the selection of habitat by polar bears, and potentially for other olfactory predators that also rely on the wind to find their prey.

2 thoughts on “Across White Fields”