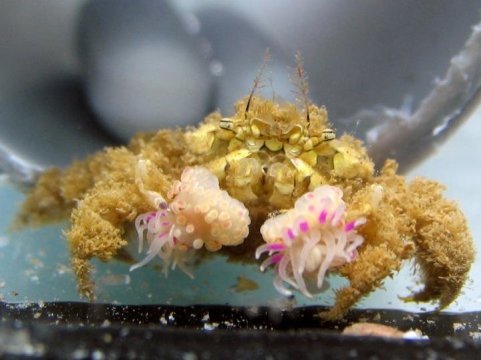 I glisten in the shallow shore.

A bitter taste of déjà vu.

You guard me with a tender claw,

Before deciding I’m worth more

This is a Rondelet, inspired by recent research that investigates the relationship between the Lybia crab and a sea anemone species belonging to the genus Alicia.

Lybia crabs are often referred to as boxer crabs or pom-pom crabs because they are almost always seen carrying a pair of sea anemones in their claws. However, until now it was not known how the crabs acquired their adornments. Over a period of several years, researchers studied over 100 Lybia crabs from the shallow waters of the Red-Sea on the south shore of Israel in Eilat. As well as observing that the sea anemone only appeared in the wild in association with the Lybia crabs (i.e. no specimens were found away from the crabs), the researchers also found that these sea anemones reproduced via crab-induced cloning. Genetic analysis revealed that when a crab acquires a single sea anemone they tear it in two, creating an identical clone in the process. Furthermore, if a crab is in a position where they have no sea anemones in their claws, then they will steal one (or part of one) from another crab, and then go on to clone this stolen sea anemone.

Further investigations are necessary to determine why the crabs have such an attachment to the sea anemones, but for now this research has revealed a unique case in which one animal induces asexual reproduction (i.e. reproduction by which offspring arise from a single organism) of another, affecting its genetic diversity in the process.