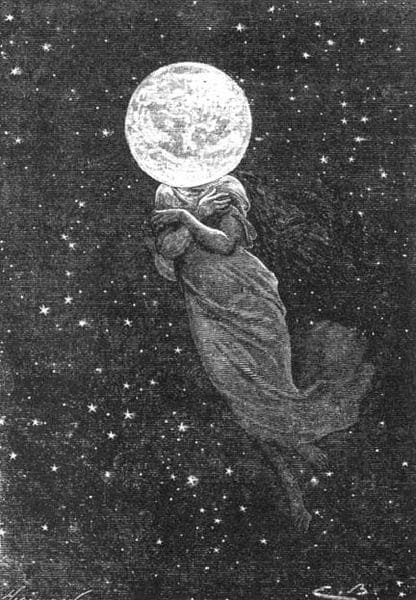 And leading us astray with dreams of youth.

A replica of our most precious stone,

Brought down by men whose footsteps fouled your home,

Reveals to us when your decay set in.

Your secret is no longer one you own;

We found the time that’s buried in your skin,

So now the light you cast seems somehow faint and dim.

This is a Spenserian stanza, inspired by recent research that has discovered the moon is at least 4.51 billion years old, which is 40 – 140 million years older than was previously thought.

By examining zircons (a type of mineral, whose colourless varieties are often used as affordable alternatives to diamonds in jewellery) found in moon rocks brought back to Earth by astronauts on the Apollo 14 mission (who landed on the moon in 1971), researchers identified a minimum age for the moon.

It is believed that the moon was formed by a violent, head-on collision between the early Earth and a “planetary embryo” called Theia in an event known as the ‘Giant Impact.’ Since the Giant Impact the moon has experienced many other smaller collisions, and because of this it is usually difficult to determine the age of moon rocks, as most of them contain a variety of different fragments from the colliding objects. Previous investigations have therefore identified the age of some of these collision events, rather than the age of the moon’s formation.

However, by examining pristine zircons that were uncontaminated from other sources (and which were created during the Giant Impact), the researchers in this study could determine the age of the moon. One of the ways that they could date the zircon was by measuring the rate at which the uranium contained within them had decayed into lead. The researchers concluded  that the formation of the Earth-Moon system must have occurred within the first 60 million years of the formation of our solar system.

6 thoughts on “A Fake Diamond in the Sky”