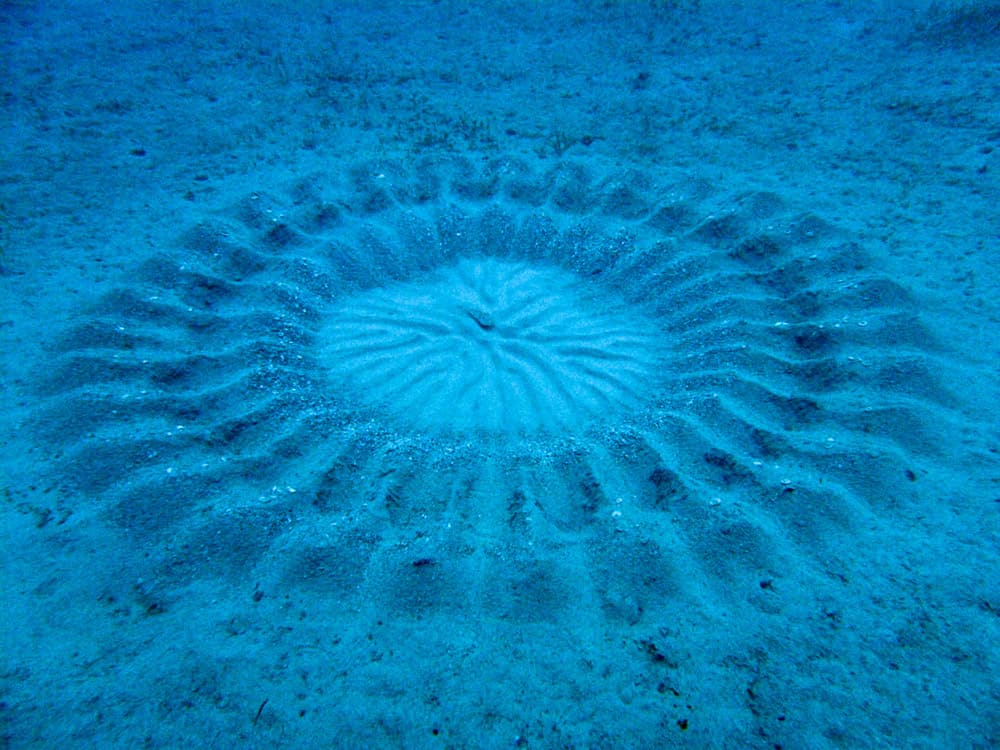 Hidden below the waves
an unknown artist plies his trade,
moving purposefully to
dig valleys and furrows
at appealing angles
that start to take shape;
sculptures of sand rising
from the featureless planes
of a sunken seabed.

The aesthetics of his artistry
conceal their true intent,
each stroke a cushioned blow
to stem ferocious currents
from the precious cargo
that they long to hold;
an aquatic gallery
of empty nests
waiting to be homes.

This poem is inspired by recent research, which has found mysterious circles on the seafloor just off the north-west coast of Australia.

In 2012, researchers discovered a new species of pufferfish that was responsible for creating elaborately designed ‘crop circles’ on the seafloor near Amami-Oshima Island in southwest Japan. The male white-spotted pufferfish spends about six weeks building a structure that is 20 times its size, and which it also adorns with coral and seashells to make it more attractive to potential mates. As well as working as an attractor, these circles also serve as a nest, whose design acts in such a way as to slow down the current in order to protect the eggs, which once laid by the female are fertilised and then guarded by the male until they hatch approximately six days later. In making these circular nests, the male, which measures about 12 centimetres in length, uses his body to create peaks and valleys around a central circle of smooth sand. He accomplishes this feat by swimming toward the centre of the circle in a straight line and then back around the centre in a circular motion, resulting in concentric patterns of sand.

Similar circles have now been spotted in the southern region of Australia’s North West Shelf, more than 5500 km away from those in Japan and in significantly deeper water. Similarities in structure, size, number of ridges, and the presence of an intricate central circle with two outer rings, make them comparable to those found in Japanese waters. However, it is still uncertain exactly which species of pufferfish were responsible for making these circles, as whilst images have been taken using a remotely operated underwater vehicle, they lack sufficient detail to be able to make a positive identification. As such, one or more specimens will need to be captured and studied closely in order to determine whether these circles are created by the white‐spotted pufferfish, a different local species, or a new species of pufferfish entirely.

4 thoughts on “Circles Beneath the Sea”