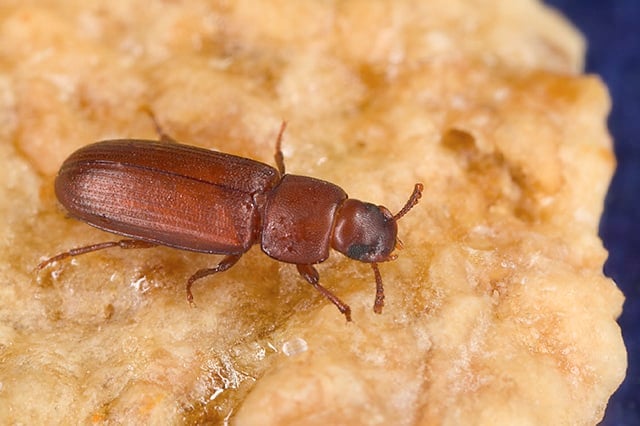 Tiny flecks of red
dance across
artificial rivers of
powdered grain,
their movements
halted only by the
confusing steps
of a familiar other.
The speed and shape
of their routines
intertwine,
dispersing into
the shallows
before contorting
to crescendos
of dual exhaustion.
Behind Perspex windows
we sift through cycles;
charting shifting patterns
across a habitat
more lab than home.

This poem is inspired by recent research, which has used flour beetles to predict how different species will interact with each other following shifting habitats brought about by climate change.

In many parts of the world, the pace at which habitats are being affected by climate change are exceptionally fast, especially for those species with a limited ability to change where they live.
Predictions on how well a species will survive due to climate change moving their habitat often focus on single, individual species. However, as many species are forced to migrate to new areas, they will encounter other species that already live there, and with whom they must now compete for food and other resources, thereby threatening the survival of both species. Studying the potential effects that this enforced competition might have is difficult, as to do so properly requires observations over many life cycles. A potential solution to this conundrum comes in the unlikely form of the flour beetle.

Flour beetles are a major pest in the agricultural industry and are highly resistant to insecticides. They consume wheat and other grains and are adapted to survive in very dry environments. These beetles also have short life cycles (typically around 6 weeks), which means that observing their populations across many generations can be done within a year, making them an ideal subject for identifying the potential effects of enforced competition brought about by climate change. In this study, researchers used two species of flour beetle, the red flour beetle (Tribolium castaneum) and the confused flour beetle (Tribolium confusum), to observe what happened to their populations as they expanded across an artificially constructed landscape. The two species of flour beetle were born into opposite ends of a series of 1.5-inch-long plexiglass boxes joined by holes, then observed as their populations expanded across the landscape and competed with each other. It was found that the expansion of each species across the landscape was slowed by the presence of the other, and across multiple generations. This suggests that habitat shifts caused by climate change can be slowed by competition from other species, thereby increasing the chance of extinction.