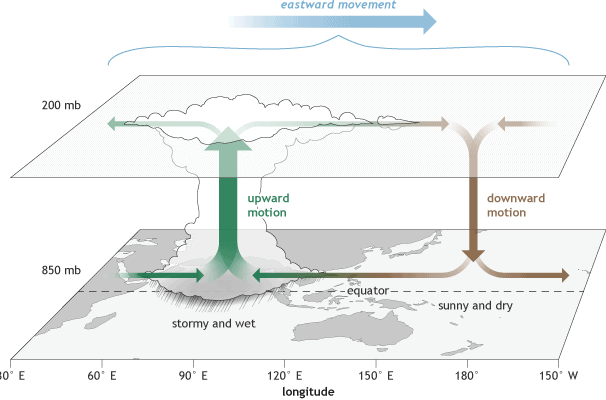 maps, the clouds begin to form.

cotton candy, a trick of the scattering

light projecting apparitions across the skies.

these vessels of rain and ice drift

tirelessly across tranquil seas and raging

the continents, rising and falling

with the unseen breath of their creator.

Peripheral forces nip and pull at the

creases of this translucent drapery,

driving contrast that redefines the

transience of their approach. A warming

touch that contracts and expands

without caution or reproach.

the cloudscape, as thunder shakes the

firmament and drought stalks the land.

Reflected dreams shimmer across their

surface, the abstract shapes a portent

of what is yet to come.

This poem is inspired by recent research, which has found that rainfall patterns across the globe are likely changing due to a rapid warming of the Indo-Pacific region.

The Madden-Julian Oscillation (MJO) is characterized by a band of rain clouds moving eastward across the tropical Indo-Pacific region. These rainclouds travel many thousands of kilometers, and as a result contribute to weather patterns (including cyclones, monsoons, and other extreme events) over most of Earth’s continents. The MJO is modulated by ocean temperatures, primarily those across the Indo-Pacific region, which means that the rapid warming in this region brought about by climate change could potentially have a huge impact on global weather patterns.

In this new study, researchers have shown that while warming has occurred over the entire Indo-Pacific region, it has been greatest over the west Pacific Ocean, creating a temperature contrast that drives moisture from the Indian Ocean and enhances cloud formation. As a result of this warming, the lifecycle of the entire MJO has changed, with the researchers from this study demonstrating that this manifests in changing weather patterns across the globe, from increased rainfall over southeast Asia and the Amazon to intensified drying over the west coast of the United States and Ecuador.