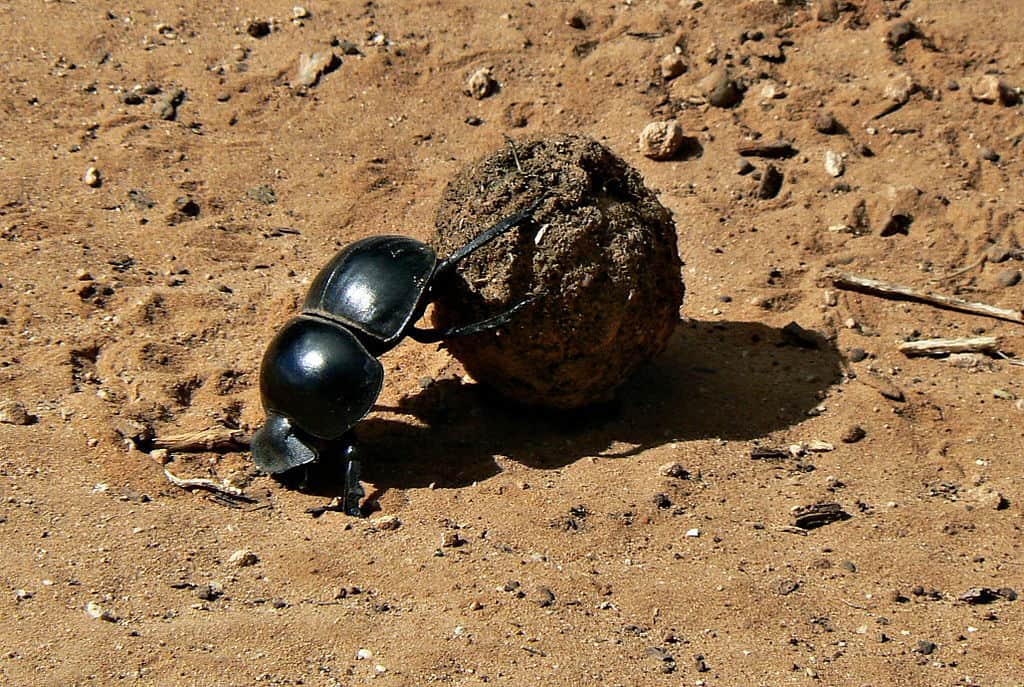 A sharp aroma seeps across the sky,

You scurry to its source;

A sustaining sphere of pungent spice.

With cargo now in tow you

Castoff across this barren sea

You catch your breath

And ride the Milky Way;

To guide you home.

Dawn breaks across the savannah.

A blazing sun pounds down,

Beating out a celestial rhythm

Across your dampened brow.

A heavenly pulse that

Drives you every onwards;

That keep you on course

At a roadside examination;

Snaking along the surface

Until the sun breaks free

From its overcast prison

And you slowly dance

This poem is inspired by recent research, which has found that in addition to using the sun and the stars to navigate, dung beetles also use the wind to keep their bearings.

The South African dung beetle (Scarabaeus lamarcki) survives and thrives by scavenging dung from other animals, crafting it into a ball, rolling it away, and burying it. These buried balls are then either used by the female to lay her eggs in or as food for the adults to eat. When rolling the dung away they do so in a randomly chosen direction as quickly as possible to prevent the ball from being stolen by other beetles. To escape effectively, the beetles need to move along a constant bearing away from the dung, and in order to do this it has been shown that the beetles make use of a variety of celestial cues, such as the sun or the moon, the polarized skylight, and even the stars in the night sky. In instances where these cues are not available, for example days that are cloudy or overcast, then the beetles are less able to move in a straight line.

However, even in these circumstances the beetles still travel in reasonably straight lines, which would indicate that the dung beetles are using additional non-visual cues to orientate themselves. This new research has discovered that in addition to visual clues from the sky, dung beetles also utilise the wind, using their antennas to monitor its velocity and help keep them on track. The researchers also found that the beetles are able to harmonise this information from the wind with the other celestial signs, creating an efficient and robust compass that ultimately increases the beetle’s precision; keeping it on track no matter what the conditions.