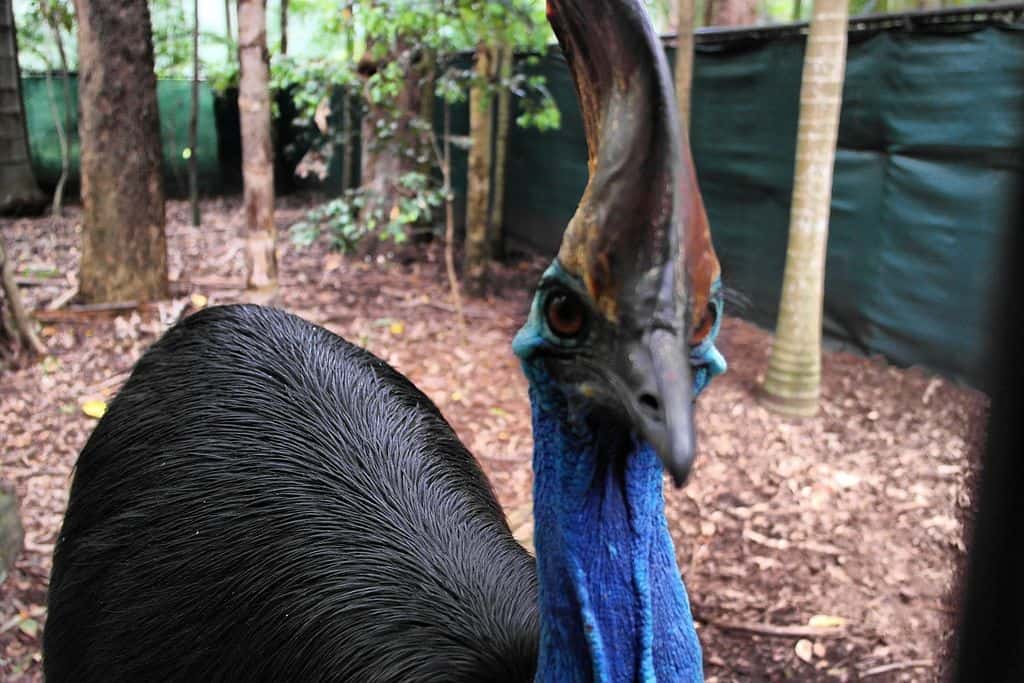 An incendiary flash of colour –

Your violent hues scatter the scrub;

We watch as you forage for food,

Your tridactyl feet conceal a blade;

We watch as you secure your stance,

Your head grazes the undergrowth;

We watch as you strike a shrub,

Coated in charcoal to induce fertility,

We watch as you long for lust,

A guttural exhalation of sound,

We watch as you augment this acoustic,

Our instruments hesitant and unsure;

You watch as we sit there sweating,

Using your casque to keep cool.

This science poem is inspired by recent research, which has found that the distinctive helmet (casque) of the cassowary acts like a radiator to help the birds keep cool in hot weather.

The cassowary is a large flightless bird that is native to the tropical forests of New Guinea and north-eastern Australia, and there are three distinct species. All three species have a skin-covered structure resembling a helmet on their heads which grows with age, and is which is known as a casque. The shape and size of these casques is species dependent, but they can grow to around 18 cm (7 inches) in height. For centuries the purpose of this casque has not been fully understood, with researchers speculating a variety of uses, ranging from a weapon or means of defence through to an attractive lure (like a peacock’s feathers) or a as a resonance chamber to amplify their low frequency boom.

In this new study, researchers used a handheld thermal imaging device to monitor southern cassowaries (the largest, and most common of the three species), and by doing so were able to demonstrate that the birds released minimal heat from their casque when the weather was cool and the greatest levels when the temperature increased. In other words, just as humans sweat and dogs pant in hot weather, it would appear that cassowaries use their casque as a thermal window to offload excess heat in order to survive. As well as providing a solution to a mystery that has confounded animal experts, this research might also reveal further information about dinosaurs, many of whom had casques and might have used them to keep cool in a similar manner.