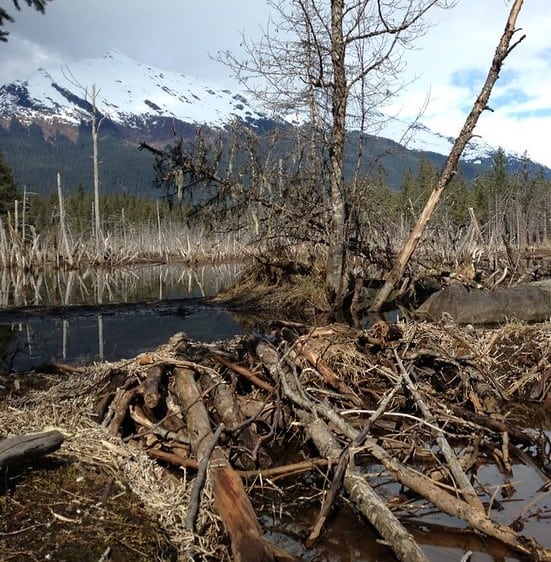 Buried deep beneath the tundra,

waiting for the trumpet call

to raise them from their peaty beds.

Saturated with the fossilised remains

of a menagerie of forgotten kingdoms,

their broken lineage piling up

into a carbonated device

Pressed against these treacherous soils,

the pristine planes of Alaskan lakes

shimmer in the haze of a low Arctic sun;

their mirrored surface reflecting the heat

of our historic achievements, as they

lap tirelessly against the rim

From the forest they come.

to erect seamless barricades that

hum with gratitude at the precision

of this evolved engineering.

Callous to the claims that we have made,

upon a frail and bloodied sky.

This poem is inspired by recent research, which has found that Alaskan beavers could accelerate the thawing of permafrost soils, and therefore intensify climate change.

Permafrost is any type of ground (from soil to sediment to rock) that has been frozen continuously for a minimum of two years. This permafrost stores the carbon-based remains of plants and animals that froze before they could decompose, and it has been estimated that the world’s permafrost holds 1,500 billion tons of carbon (almost double the amount of carbon that is currently in the atmosphere). As global warming causes temperatures to rise, this permafrost could increasingly thaw and become unstable, thereby releasing massive quantities of methane and other greenhouse gases into the atmosphere, intensifying climate change. Bodies of water in these regions can accelerate this process, because the water they contain is warmer than the surrounding soil, causing the permafrost to thaw. And it would now appear that Alaskan beavers are actively contributing to this process.

Alaska’s beavers are benefitting from the effects of climate change, with increased warmth and longer growing seasons leading to an increase in the number and spatial distribution of beavers in the region. In less than a couple of decades, they have expanded into many tundra regions where they’d never been seen before, building more dams in their new homes, and thereby creating a host of new water bodies that could in turn accelerate the thawing of the surrounding permafrost soils. In one area near the town of Kotzebue in northwest Alaska, satellite images have confirmed the creation of an average of five new beaver dams per year between 2002 and 2019, an increase of over 5,000%. As a result, the water area in this region was found to grow by 8.3% over the same time period. As these water bodies are warmer than the surrounding tundra, the increasing number of beaver-built lakes in the region will potentially accelerate the melting of permafrost. This research therefore highlights that beaver-driven ecosystem engineering must be carefully considered when accounting for changes occurring in some permafrost regions, and the potential impact that this can have on climate change.