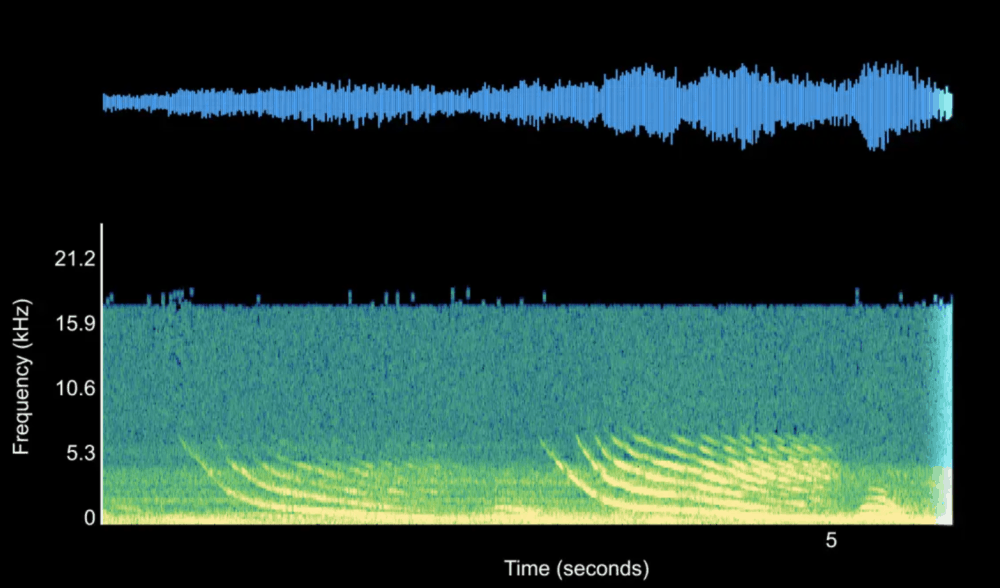 At the top of the world we

the secrets that these

Dancing across the pixels,

a medley of melodies

a family of bearded seals,

as the gruff exchanges

of two sparring walruses are

exposed by a clanging of bells.

The lethargic whistle of

across the display, before

it erupts into colour –

a jubilant riposte to the

to form an acoustic map

of our own cacophony.

This poem is inspired by recent research, which has investigated the seasonal variation of the sounds made by Arctic marine mammals.

Declines in Arctic sea ice cover are influencing the distribution of protected marine mammals, many of which are important for local Indigenous Peoples. In this new study, researchers focussed on listening to the acoustic sounds made by five species of Arctic marine mammals: bowhead whales, beluga whales, walruses, bearded seals, and ribbon seals. This non-invasive passive acoustic monitoring (PAM) is an ideal method to better understand the movements and distribution of these species, without impacting on them or their environment.

With the support of local indigenous hunters and fishermen, the scientists deployed acoustic recorders in three locations in the northern Bering Sea, a marginal sea of the Pacific Ocean which connects to the Arctic Ocean via the Bering Strait. During this study, the recorders logged more than 33,000 individual recordings from the five species of marine mammals during a four-year time period. This is the first study to conduct such coastal, year‐round acoustic monitoring in this region. Furthermore, these results constitute an important baseline of information in the context of a rapidly transforming Arctic ecosystem, and alongside continued monitoring, they will help to identify trends caused by long-term changes in environmental conditions and human-related activities.