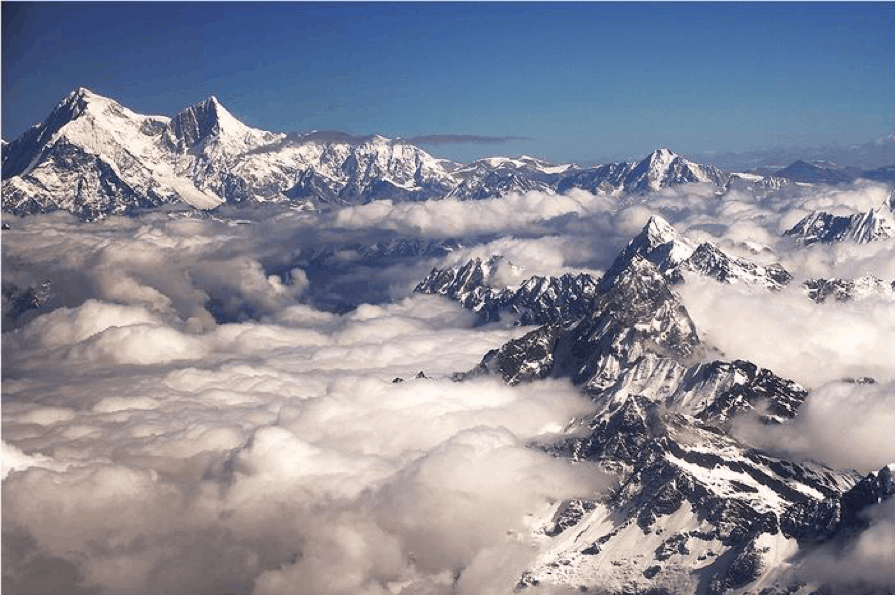 The crest above the grassy plains

to pierce the very fabric of the sky,

as beneath its jutting crown

lie buried beneath the snowpack:

The fabricated whispers of

as muted echoes in the ice,

back to life by traces of ash;

The sooty treads of displaced

the welts of their migration

The malign stench of

a Cornish mine gallery,

hang loosely in the breeze;

The cloying zest of dark

The flickering lights of

Senses then consigned to

This poem is inspired by recent research, which has found that a Himalayan glacier shows evidence of the start of the Industrial Revolution.

Ice cores from glaciers provide a unique contribution to our view of past climate, because the bubbles within the ice capture the gas concentration of the atmosphere during a specific time period. As such, ice cores can tell scientists about temperature, precipitation, volcanic activity, wind patterns, and pollution events. In this study, researchers used an ice core extracted from a glacier in the Himalayas and corresponding to the time period of 1499 – 1992, to determine how human activity had affected the ice in any way, and, if so, when the effects had begun.

The Dasuopu glacier is located on Mount Shishapangma, the 14th highest mountain in the world, and at 7,200 m above sea level it represents the highest-altitude site in the world from which scientists have obtained a climate record from an ice core. The analysis of this core found higher-than-natural levels of a number of toxic metals, including cadmium, chromium, nickel and zinc, in the ice starting at around 1780, which corresponds to around the beginning of the Industrial Revolution in the United Kingdom. Those metals are all byproducts of burning coal, and the researchers also found that those metals were likely transported by westerly winter winds, which travel around the globe from west to east. Given that the first mountain climbers didn’t reach the summit of Mount Shishapangma, until 1964, these results demonstrate that humans were having an impact on the region long before they took their first steps there.

2 thoughts on “Footprints in the Himalayas”