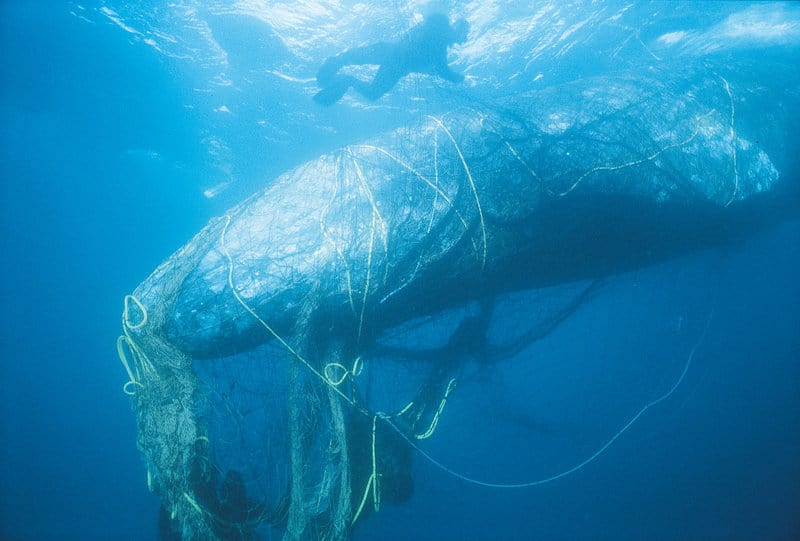 Basking in the tainted gloss

these once frigid waters

cavort along the coastlines;

a carnal call to

a Venn diagram of

tugging at the ropes to

we forget the shackles

that pull them ever

towards the ocean floor.

This poem is inspired by recent research, which has found that marine heat waves are linked with spikes in the number of whales that become entangled in fishing gear.

Climate change is increasing the frequency and severity of marine heat waves (warm water anomalies that disrupt marine ecosystems), which in turn are creating new challenges for ocean conservation. For example, the high productivity of the California Current (a Pacific Ocean current that moves southward along the West Coast of North America) is supported by a wind-driven upwelling of cool, nutrient-rich water, sustaining large populations of krill, anchovy, and sardines that in turn attract whales and other predators. The intensity of this upwelling varies from year to year, but the extreme warming event in 2014-16 (which became known as the ‘warm blob’) compressed the prime habitat for these smaller marine species into a narrow band close to the Californian coast. In turn, predators, such as humpback whales, that are normally found offshore, were likely to move inshore in search of food. Further complicating this situation was another consequence of the warm blob: an unprecedented bloom of toxic algae. Previous research has shown that an increase in marine temperatures can lead to the formation of such blooms, and when scientists realised that they were causing dangerous levels of the neurotoxin domoic acid to build up in the local crab populations, the opening of the 2015-16 crab fishing season was delayed until late March 2016. Normally, crab fishing activity is highest in November and December, but in 2016, because of the enforced delays, peak fishing activity coincided with the arrival of the migrating whales in April and May.

In this study, the researchers found that whale entanglements, which averaged about 10 per year prior to 2014, increased to 53 and 55 in 2015 and 2016, respectively. This research shows how important it is for scientists to work closely and communicate clearly with the various fishing communities in a region, and one positive outcome of this work has been the creation of the California Dungeness Crab Fishing Gear Working Group. This group includes commercial fishermen, state and federal resource managers, conservationists, and scientists, and has been closely working together to support collaborative efforts to reduce entanglements of whales and other species.