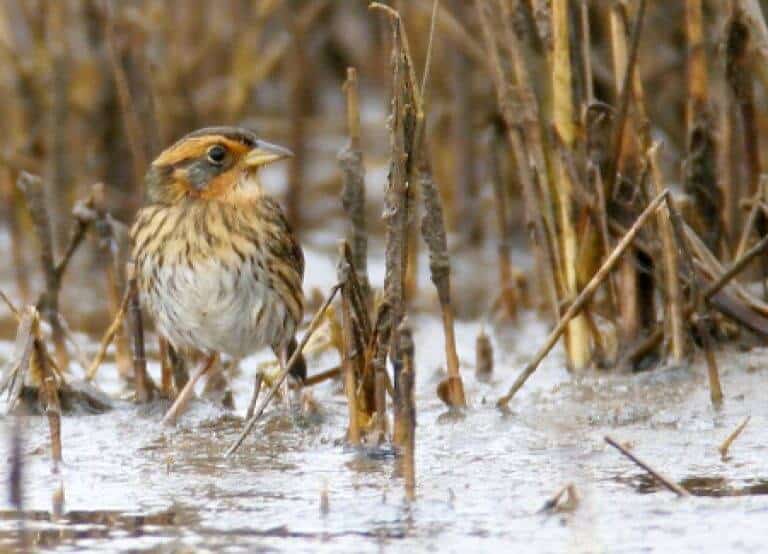 Sailing swiftly along the salted seashore,

Amongst saline marshes and sunken reeds

You build your nests in tall grasses,

Limited by any stable support to protect

Our token gesture of ‘high concern’;

To the limitations of your non-adaptive home.

And whilst others sing of your promiscuity,

Your profligate mating habits are no match for

The profligacy with which we destroy your habitat.

A row of empty nests, their underlying thatch

Floating in the low tides of our inaction.

This poem is inspired by recent research, which has found that that some sparrow species will go extinct within the century due to climate change.

The global breeding range of the saltmarsh sparrow extends from Virginia to Maine, with a population estimate of 60,000 birds. Sea-level rise can negatively impact breeding by reducing the amount of available habitat, and by increasing the rate at which the birds’ nests are flooded.

This new research has estimated the saltmarsh sparrow populations in coastal New Jersey over a 42-yr period, based on the simulated effect of low (0.35 m) and high (0.75 m) sea-level rise. These results show that if left unchecked, the saltmarsh sparrow population will likely reach a quasi-extinction threshold (i.e. the level at which the number of adults may be insufficient to assure persistence of the species) within the next 20 years. Given the projected increases in sea level over the next few decades, more work is needed to  evaluate the effectiveness of management actions, such as predator control, in order to avoid the extinction of saltmarsh sparrows.