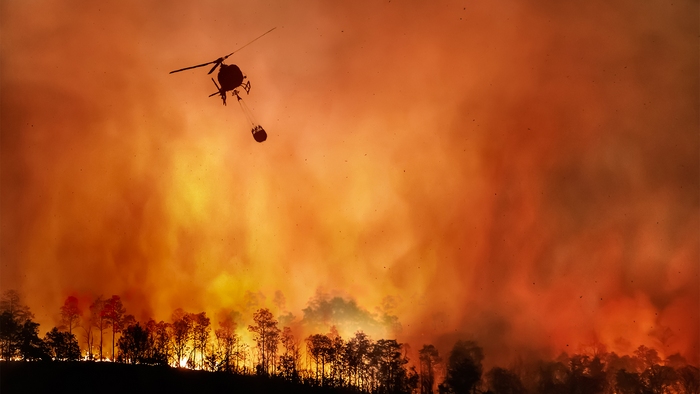 Artificial ignitions
light the touch –
flames leaping high
above fiery crowns
to rain heat
and light
and smoke.
Fetid air that leaks
into every breath
with perverse
unspoken ease.
Malignant alignments
of all that we are
and could yet become –
casually trading lives
for commodities
and convenience
as ephemeral
as the air
we now breathe.

This poem is inspired by recent research, which has found that human-initiated wildfire smoke is responsible for around 20,000 premature deaths per year in the United States.

Fires pose a threat to human lives, infrastructure, and ecosystems. They also contribute significantly to air pollution, as exposure to high levels of particulate matter under 2.5 µm (PM2.5) from fires can have negative health effects, such as respiratory infections, asthma, lung cancer, and heart disease. This Fire PM2.5 causes tens of thousands of premature deaths annually in the contiguous United States (i.e., the 48 states on the mainland of the United States, as well as the District of Columbia, excluding Alaska and Hawaii) and is more toxic than PM2.5 from other sources. The rise in fire activity and resulting decline in air quality is believed to be linked to human activity through climate change. Additionally, pinpointing human activities as the cause of fires can aid in reducing smoke by directing resources towards specific ignition sources.

In this new study, researchers examined the impact of fires caused by human activity, such as agricultural fires and human-initiated wildfires, on PM2.5 concentrations in the contiguous United States from 2003 to 2018. They found that these human-ignited fires are the main source of Fire PM2.5 in both high and low fire years and that smoke from these fires also contributes a significant amount to total PM2.5. The frequency of fires in the US is increasing, and research shows that smoke from human-caused fires was responsible for 20,000 premature deaths in 2018, an increase of almost 300% from 2003, when there were fewer fire events. These results suggest that a significant portion of smoke exposure and impacts in the contiguous United States are from fires started by human activities, which could then be targeted for future management and policy decisions.