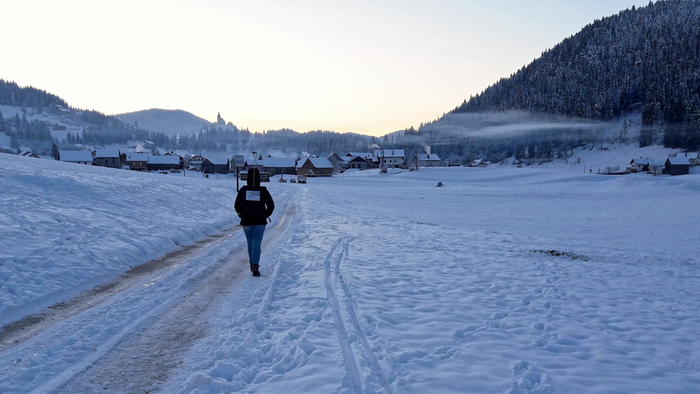 Sunk between the peaks,
peaceful, sloping roofs
poke gently from the
snow-white floor.
Tiny flecks of amber
lined up in rows
against the whistling sounds
of winter’s cool approach.
Morning mists come out
to play,
caught beneath
unseen sheets
that lie in wait
across the grooves.
Elevated air
now caked in dust,
a crown of soot
to wear for keeps.

This poem is inspired by recent research, which has found that wood heating pollutes the air in mountain areas more than previously assumed.

The marketing of wood as a ‘carbon-neutral’ fuel, alongside the rising prices of fossil fuels and the cost-of-living crisis, have all led to a significant increase in the use of wood as an alternative fuel source. According to the European Environment Agency, wood combustion now accounts for over half of the small particulate matter (PM2.5) pollution in Europe. Wood burning also creates black carbon (AKA soot), a harmful, carcinogenic pollutant that also needs to be monitored carefully. Previous air quality studies of PM2.5 and soot have largely focussed on cities; however, given that approximately 20% of Europeans live in hilly and mountainous regions, these clearly also need to be carefully monitored as well.

In this new study, researchers attempted to measure the impact of wood burning on the air quality in one such rural location, focussing on the Slovenian village of Retje, in the municipality of Loški Potok. This village is in a hollow and is representative of many mountainous and hilly rural areas that rely on wood heating systems in Central and South-Eastern Europe. By using two fixed measuring stations and mobile measurements taken using instruments inside a backpack, data was collected over December 2017 and January 2018. Overall, whilst air quality was found to be moderate during the entire study period, several high pollution events occurred in which the concentrations of soot and PM2.5 matched those of large cities with heavy traffic, exceeding the World Health Organisation’s recommendations for the daily limit. These high levels of pollutants were found to be attributed to one effect that frequently occurs in the mountains in winter: temperature inversions. In the morning, the sun warms the upper parts of the atmosphere faster than the lower parts – due to the morning fog that forms in a hollow, and which is then sheltered from the wind, preventing warming near the ground. This temperature inversion then acts like the lid on a pot, preventing exhaust gases and particles from escaping upwards and causing them to concentrate at the bottom, where humans become exposed to them. The results of this study highlight the importance of high-resolution air quality measurements for monitoring and assessing the impact that wood burning has on local air pollution, especially in mountainous areas that are prone to temperature inversions.