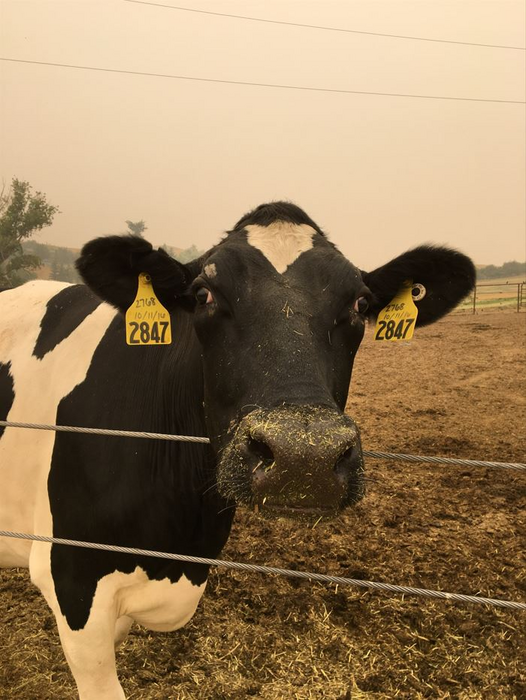 Summer’s drought erupts,
as thirsty soils and
crowded scrubs ignite.
Blistered winds tear
across the sky,
dusting each breath
with heat,
and soot,
and blight.

In hazy fields they wait,
unwary monoliths
of black and white
lying prone beneath
our blazing, tainted sheet.
Lactation lacerated
by the febrile touch
of our distant,
tainted hands.

This poem is inspired by recent research, which has found that dairy cows exposed to wildfire smoke produce less milk.

A wildfire is an uncontrolled fire that burns across wildland vegetation, often in rural areas. Wildfire risk depends on a number of factors, including temperature, soil moisture, and the presence of trees, shrubs, and other potential fuel. Given that all of these factors have strong direct or indirect ties to climate change, it is perhaps no surprise that wildfires have occurred more frequently around the world over the past few decades. In the United States alone, 10.3 million acres were burned by wildfires in 2020, representing the largest area burned in a single year since 1960. As well as the immediate and long-term effects on vegetation, habitat, and water bodies, smoke from wildfires contains fine particulate matter, a known air toxin and a leading source of air pollution-related diseases in humans and other animals.

In this new study, researchers have examined how dairy cattle in the Western United States may be affected by these air pollutants from wildfire smoke. The Western states, where wildfires are especially prevalent, are home to more than two million dairy cows that produce more than 25% of the nation’s milk. A group of Holstein cows in Idaho were observed throughout the 2020 Pacific Northwest fire season, which occured from July to September. During this time the cows were exposed to wildfire-derived air pollutants for seven consecutive days in mid-September, at levels that were up to 23 times the US Environmental Protection Agency’s 24-hour average air quality limits. During this seven-day period of smoke exposure, the cows were found to produce less milk, an effect which persisted for another seven days beyond exposure. These cows were also found to have altered protein and fat metabolisms and reduced immune cell populations in their blood. This research thus highlights the implications for dairy cattle welfare, costs to farmers, and indeed the entire US dairy industry as climate change continues to increase both the severity and frequency of wildfires in the region.