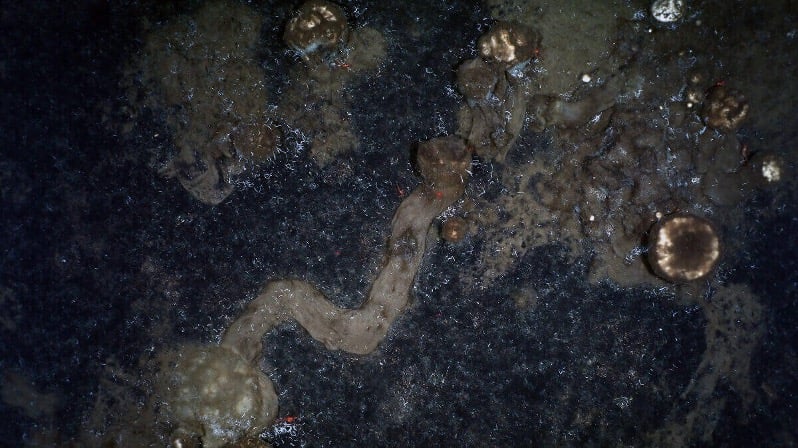 Sluggishly you sweep
across the sea,
ceaselessly stimulating
your supposed sessility
as you secrete spiky streams
through dense, porous skeletons.

Interwoven spicules that
suggest clandestine movements,
swaying in the currents
deep
deep
beneath the surface.

A hidden sanctuary of shifting
shapes that stray from sight;
strategies of survival
below submerged peaks
and shattered sentiments.

This poem is inspired by research, which has found that sponges leave trails on the sea floor in the Arctic deep sea.

A sponge is a simple animal with many cells, but no mouth, muscles, heart, or brain. The basic body plan of a sponge is a jelly-like layer sandwiched between two thin layers of cells, and there are over 10,000 species of sponge, most of which live in the ocean and feed on bacteria and other microorganisms, although a few of them also eat tiny crustaceans. Adult marine sponges are usually thought to be stationary, picking a spot on the seafloor while still in their larval stage and sticking to it. Lacking muscles to move around, they are generally referred to as ‘sessile’ (i.e. fixed in one place), as opposed to ‘motile’ (i.e. capable of motion) marine creatures. However, new research has found distinct trails across the Arctic seafloor, made of brown spicules (the spikes that belong to the sponges and which provide them with structural support), indicating that some adult sponges are actually capable of movement.

The researchers in this study examined videos taken by the icebreaker Polarstern on a 2016 mission around the Langseth Ridge in the Arctic Ocean. These videos revealed a densely populated community of sponges, 10° further North than any previously reported observations. Over 70% of the images containing sponges also featured trails, observed as densely interwoven spicules connected directly to the underside of individual sponges, thereby suggesting that they were indeed traces of motility. Three-dimensional modelling of the trails also revealed that the sponges changed direction as they moved, and that they moved uphill, implying that the sponges were moving themselves, rather than being shifted by gravity or strong ocean currents. This is the first time that abundant sponge trails have been both observed in a sponge’s natural habitat and directly attributed to sponge mobility. Further research is now needed to better understand exactly why these sponges would move, although it is believed that they may need to do so in order to better access food in the sparse Arctic environment.