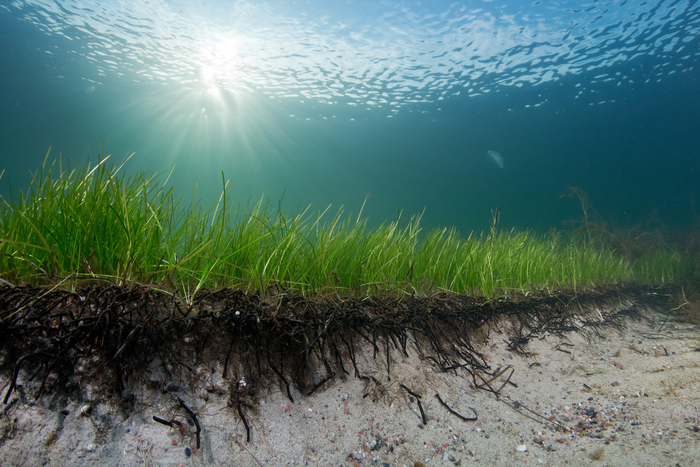 Sunken meadows
swagger in the tides,
awnings of green
that lurch
and lean
and weave.
Leafy locks
that tangle waves,
dulling the corrosion
of their coastal homes.
In sandy dunes
matted roots
take hold,
unseen anchors
that bind each grain
against the coarse
and ever-coming
sea.

This poem is inspired by recent research, which has found that seagrass roots strongly reduce coastal erosion rates in sandy sediments.

Coastal erosion is a result of both human activities and natural environmental changes, resulting in coastal land being swallowed by seawater. Such erosion is a growing problem internationally because of sea-level rise driven by climate change, increasing populations, and development in coastal areas. At present, coastal erosion affects about 70% of the sandy coasts across the globe, with many coastal villages and houses forced to move inland, squeezing the living space of humans, as well as destroying coastal biodiversity and ecological balance. Often the default solution for such erosion is to install expensive bulkheads or rock walls, yet many of these fail to hold up during storms and can also lead to further damage to the ecosystem. Another solution is to utilise nature’s own defences against coastal erosion, with vegetated coastal ecosystems such as seagrass beds increasingly being promoted as sustainable storm and flood defence solutions, as they reduce the energy of the incoming waves and therefore dampen the effects of erosion. However, whilst several studies have quantified the positive impact of aboveground seagrass canopies, there has been some uncertainty about the extent to which their roots contribute towards this impact.

In this new study, researchers found that the role of seagrass roots in preventing erosion likely stems from differences in sediment type. Common eelgrass is a seagrass species that is widespread through the Atlantic and Pacific oceans, and which thrives in both sandy and muddy sediments. By taking samples of eelgrass and placing them in a large tank capable of simulating waves, researchers were able to measure the extent to which the seagrass dampened any waves in both sandy and muddy environments. The results demonstrated that seagrass roots are very effective in reducing erosion rates in sandy sediments, with erosion reduced by up to 70%; in contrast, erosion rates in muddy sediments were low and unaffected by seagrass roots. This would seem to indicate that the seagrass roots are able to bind together the underwater dunes in sandy environments, effectively reinforcing them. These findings highlight the important role of seagrass roots in erosion mitigation, which has previously been overlooked compared to the role of aboveground canopies.