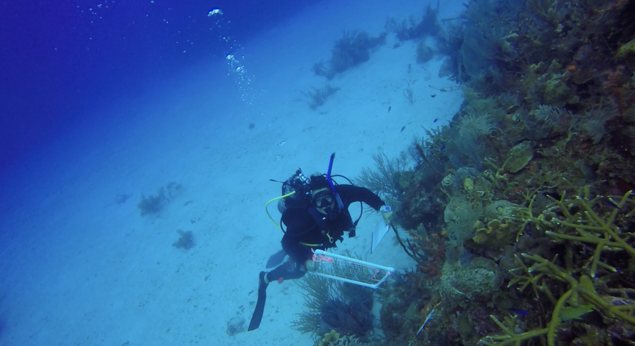 Colonies of colour
stretch out
beneath the sea,
sessile shelters of life
whose calcite frames
sway with the tides
like ribbons
in an autumn breeze.
Bands of sickly white
scratch their skin,
exposing sun-bleached bones
from base to tip –
progressing pestilence
that strips
and maims
and kills.
As pigments drain
diversity persists,
forming barriers of care
that suffocate the spread –
a healing presence
of collective strength.

This poem is inspired by recent research, which has found that under certain conditions, disease-resistant corals can help protect other corals that are more vulnerable to disease.

Coral reefs have in the past been decimated by coral diseases, particularly those in the Caribbean. For example, the highly transmissible white band disease, or white syndrome, infects certain types of corals, killing the coral tissue to leave behind a bare, white skeleton – thus giving the appearance of a white band moving up the coral as it spreads. Coral nurseries can help to restore some of this damage, by providing fragments to replenish coral-deprived areas. In these nurseries, multiple genotypes (i.e. coral with different genetic makeup) are reared, in order to support their adaptation to future environmental conditions. However, ocean nursery-reared corals, like wild corals, are also susceptible to outbreaks of disease.

In this new study, researchers monitored 650 coral fragments in a coral nursery over a period of five months, tracking an outbreak of white band disease. In evaluating these observations, the researchers found that when corals of the same genotype were grown together, they were more vulnerable to disease than those corals that were grown among a mixture of genotypes. The study also found that some vulnerable corals can be protected by resistant genotypes; in other words, certain corals were more resistant to disease just by being around other corals that were particularly resistant. The ability of resistant coral to help protect vulnerable individuals is like how vaccinations work among humans: vaccinated individuals resist a disease, erecting a barrier that weakens its ability to move through them and on to the next susceptible person. These findings provide further evidence that genetic diversity can help reduce disease transmission among corals, while also showing that it’s important to consider how corals are arranged in nurseries and reef restoration projects to better prevent the spread of disease.