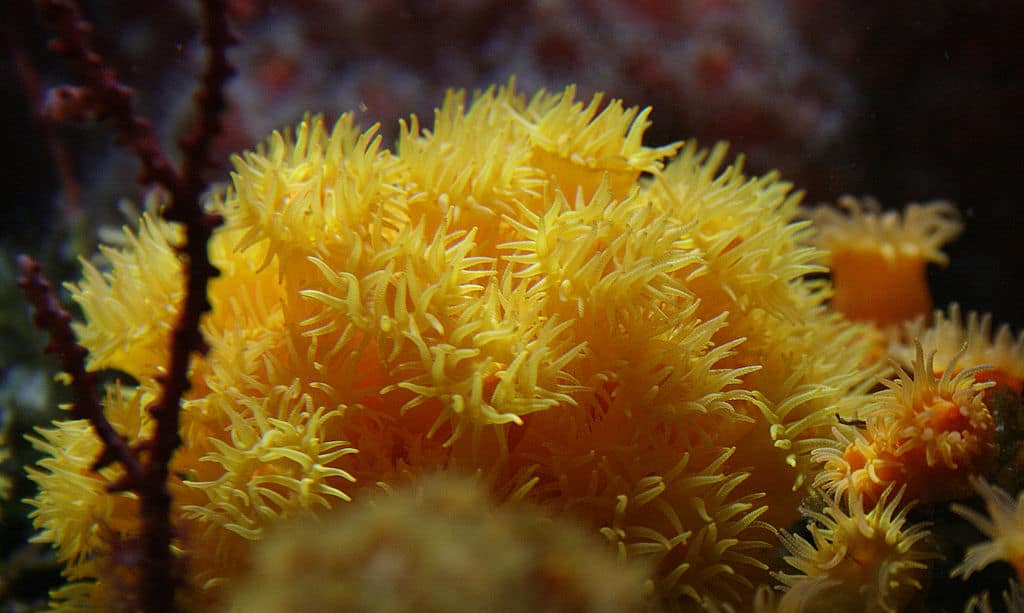 In reefs and caves you make a vibrant nest,

As sunlight burns you scheme whilst taking rest,

But when the night sets in, your case unlocks.

As tendrils slither through the murky brine,

They taste the brackish soup for future prey;

Their whispers form a soundscape of dismay.

Amongst the tiny titbits in the dark,

You brush against its gently throbbing spark,

As mouths and tendrils quiver with delight.

With palate wet and sated by new zest,

You search for other morsels in your nest.

This is a Shakespearian Sonnet, inspired by recent research which has found that some sea corals can work together to capture and eat large jellyfish.

The coral Astroides calycularis is native to the Mediterranean Sea, where it can be found on reefs, as well as in caves. These bright-orange corals typically feed on zooplankton (tiny organisms drifting in oceans, seas, and bodies of fresh water); during the night the tentacles protrude from the coral’s shell and inject their prey with poison before dragging it into the mouth of the coral where it is then digested. These corals have long been known to form small colonies, connecting together to create a many-mouthed single organism, but until now it was assumed that their diet was strictly limited to tiny marine creatures such as zooplankton.

However, when researchers spotted several mauve stinger jellyfish (Pelagia noctiluca) stuck to undersea caves near the coast of Sicily, they noticed that these glow-in-the-dark jellyfish were actually being devoured by the coral. As these jellyfish tried to swim away from the Astroides calycularis they brushed past other specimens, which in turn latched on to them with their tentacles, making escape almost impossible. This research also highlights how other coral might enjoy a more varied diet than previously thought.

2 thoughts on “The Mouths in the Cave”