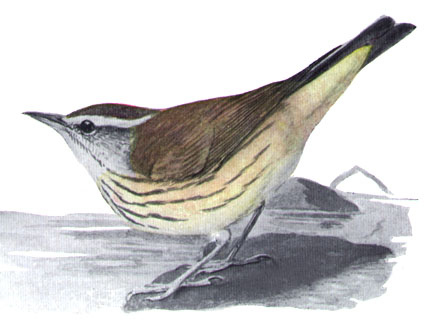 Beneath the rock lies liquid gold,

With pressures set and bills to fold;

But prospectors should be aware,

As well as housing lush greenbacks,

These biomes mask a hidden tax;

For all the songbirds living there,

For as we dig with unchecked greed

Their song becomes a hymn of need;

To stop a mute and silenced air,

Beneath the rock lies liquid gold,

This is a Kyrielle Sonnet, inspired by recent research which looks at how fracking in West Virginia has resulted in a potential decline for one of the region’s songbirds.

Fracking is the process of injecting liquid at high pressure into subterranean rocks, to force open existing fissures and extract oil or gas. It has resulted in a shale gas boom in the USA, and the central Appalachian region in northwestern West Virginia is experiencing the country’s most rapid growth. As fracking is a relatively recent phenomenon, little is known about how it might affect flora and fauna in a particular region. However, this new study concentrates on the effects that fracking in the region has had on the population of the Louisiana waterthrush, a New World warbler that is characterised by a plain brown back and white underparts streaked with black.

By using ground-based measurements, aerial photography and satellite imagery, the researchers were able to demonstrate that as shale gas development has expanded in the area, nest survival and productivity for the Louisiana waterthrush have declined, along with habitat quality. Additionally, the size of individual waterthrush territories has increased, suggesting that the birds need to travel further to find sufficient resources. This study is one of the first to demonstrate that shale gas development can affect songbird reproductive success and productivity, and should serve as a call-to-arms to closely monitor the present and potential impacts of shale gas extraction on regional species, and to develop strategies for mitigation and avoidance of potential future impacts.

5 thoughts on “A Fractured Song”