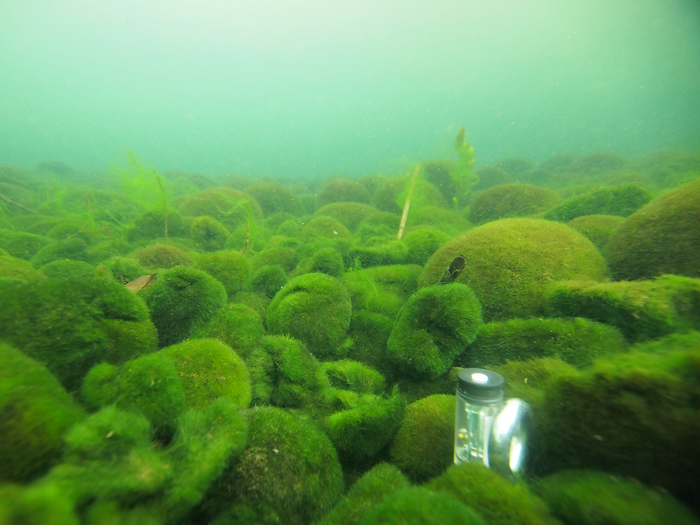 Balls of sunken green
sloshing in the seiche,
velvet, bouncy growths
seeking shade
beneath the frosted roofs
of floating, breaking glass.
Frail and muddy ghosts
that dance across the lake
with lithe unease,
filaments severed
by the scintillating grasp
of a cruel
and rising sun.

This poem is inspired by recent research, which has found that marimo algae balls are at risk from deadly winter sunburn.

Marimo are fluffy, squishy green balls of underwater algae which form naturally when floating strands of the algae Aegagropila linnaei are bundled together through the gentle rolling motion of lake water. The largest marimo, found in Lake Akan, in Hokkaido, Japan’s northern main island, can grow up to 30 cm in diameter. Marimo are an endangered species and their decline is usually attributed to humans either altering or polluting the freshwater lakes in which they live. However, there has not been much research into the effect that changing access to sunlight brought about by global warming might have on the species.

In this new study, researchers visited Lake Akan’s Churui Bay in winter to measure the temperature and light intensity underwater, both with and without ice cover. Normally any marimo in the Lake are sheltered from too much winter sunlight by a thick layer of ice and snow, but the ice is thinning at the site due to the climate crisis. The researchers removed algae strands from the marimo balls and tested their normal photosynthetic ability. They were then placed in containers in ice under artificial light, which was adjusted to shine at different intensities for different periods of time. The results indicated that the algae could survive bright light for up to four hours, and would then recover if placed under a more moderate light for 30 minutes. However, the algae died when exposed to bright light for six hours or more. These results suggest that photoinhibition (the inability to photosynthesize due to cell damage) is likely to be a serious threat to the marimo in Lake Akan if global warming leads to further receding ice cover in the region.