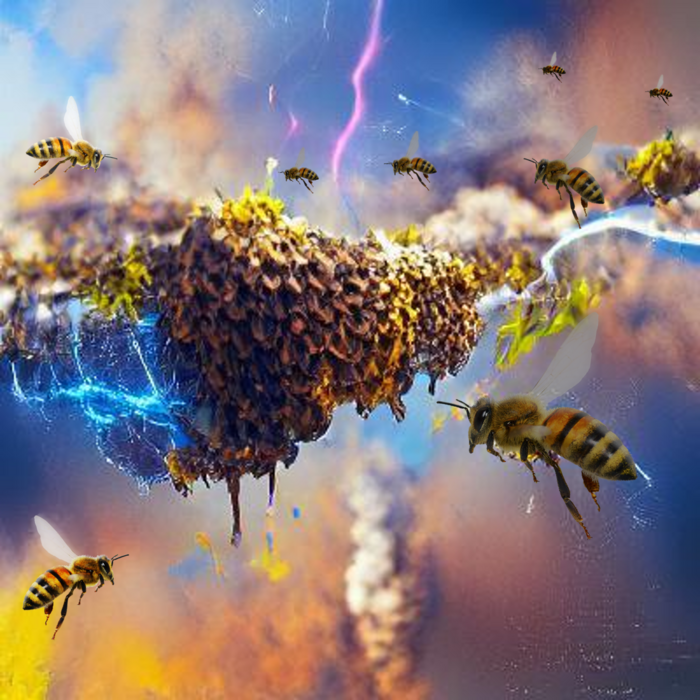 Hidden fields drift
across the sky,
crowds of life
that crackle with intent
across unsuspecting
tones of milky blues
and scheming greys.
Swarming,
swerving,
flitting,
flowing,
shifting,
thronging,
dancing,
growing.
Living charges
prancing through
the firmament,
with the graceful ease
of the great unknown.

This poem is inspired by recent research, which has found that insects can contribute to atmospheric electricity.

The Earth’s atmosphere is always electrified to a greater or lesser extent, with variations in this atmospheric electricity known to be caused by factors include precipitation, anthropogenic pollution, volcanism, and potentially even earthquakes. Given their ubiquity in the global atmosphere, and the fact that many different species have been shown to carry an electric charge, it has previously been postulated that large clusters of flying insects might also provide a significant effect on atmospheric electricity.

In this new study, researchers have measured the electrical fields near swarming honeybees, and in doing so have demonstrated that such swarms can produce as much atmospheric electric charge as a thunderstorm cloud. This research reveals how swarming, migrating insects can transport charge in the lower atmosphere, thereby highlighting how large collections of charged insects can contribute to electrical variability in the atmosphere. These findings have various physically- and biologically- relevant implications; for example, this form of electricity is not considered in any of the current climate models. Given that insects are not the only source of biogenic charge in the atmosphere (birds and microorganisms also carry electric charge), this research highlights the need for further interdisciplinary research into the dynamic electrical interactions between physical and biological entities in the atmosphere.