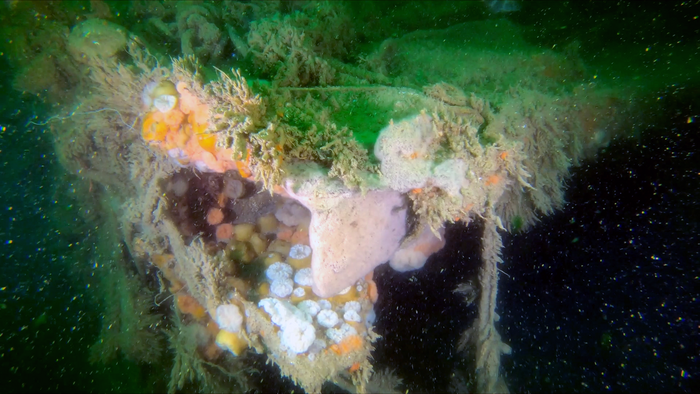 Remnants of war
recoil
beneath the sea,
poisoned mementoes
that leech
and bleed
and seep.
Sunken spoils
strewn like silt
over lost and
broken floors –
corroded ambitions
spewing forth
from violence
that never thought
to fade.

This poem is inspired by recent research, which has found that a World War 2 shipwreck has leaked many pollutants into the sea, changing the ocean floor around it.

The seabed of the North Sea is covered in thousands of ship and aircraft wrecks, as well as millions of tonnes of shells, bombs, and other munitions. These wrecks contain hazardous substances (such as petroleum and explosives) that may harm the marine environment; for example, it is estimated that World War 1 and 2 shipwrecks collectively contain up to 20 million tonnes of petroleum products alone. However, despite the huge potential environmental impact of these wrecks, there remains a lack of information about both their location, and the extent of the pollutants that they are leaching into the sea.

In this new study, researchers focussed on the V-1302 John Mahn shipwreck. This boat had originally been a German fishing trawler, before being requisitioned during World War 2 and then sunk by the British Royal Air Force in front of the Belgian coast. Chemical analyses of samples taken from both the steel hull and surrounding sediments revealed concentrations of toxic pollutants that were closely correlated to the distance from the shipwreck, with the highest metal concentrations found in the sample closest to the ship’s coal bunker. The researchers found heavy metals (such as nickel and copper), polycyclic aromatic hydrocarbons (a class of chemicals that occur naturally in coal, crude oil, and gasoline), arsenic, and even explosive compounds. The results of this study demonstrate that even after 80 years, a historic shipwreck can still significantly impact the surrounding sediment and marine environment. It also highlights the need for further observations of other shipwrecks to properly assess the total impact that these wrecks have on the surrounding ecosystems.