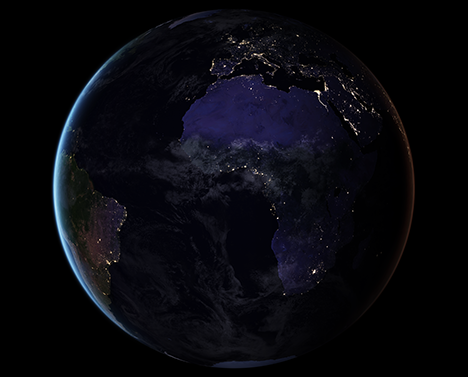 Stood at ease we travel
restlessly through the
stillness of space,
apprenticed nomads
blindsided by the
fluctuations
of our approach.
Motions exchanged
from roving ground
to troubled sky –
every push a pull
every pull a push.
Spinning,
whirling,
bending,
skewing,
twisting,
buckling,
writhing,
spewing –
each imperfection
a knowing tell
to future days
and coming nights.
Rotating into sight
by the subtle
projections
of our ceaseless,
sleepless
thoughts.

This poem is inspired by recent research, which has improved the ability to predict fluctuations in the rotation of the Earth and with it the length of the day.

Geodesy is the science of accurately measuring and understanding three fundamental properties of the Earth: its geometric shape, its orientation in space, and its gravity field— as well as the changes of these properties with time. Similarly, the angular momentum of the Earth is defined as the movement of its mass when it is rotating or spinning, a property that is fundamental to the structure and variability of the atmosphere, and which therefore has an important influence on both regional weather and climate. The total atmospheric angular momentum is also directly related to the rotation rate of the Earth and, hence, the length of day: as the Earth spins around its axis, its overall mass and rotation result in what appears to be a steady rotation. However, surface wind changes and variations in high and low-pressure patterns can alter this and if the atmosphere speeds up due to stronger winds, the Earth’s rotation consequently slows down, causing the length of day to increase.

In this new study, researchers used state-of-the-art mathematical modelling to show how fluctuations in the length of the day can be predicted more than a year in advance, which is significantly longer than had previously been possible. Given the links between angular momentum and climate, this method also provides a source of long-range predictability from within the atmosphere, as well as a firm link between geodesy and climate prediction.