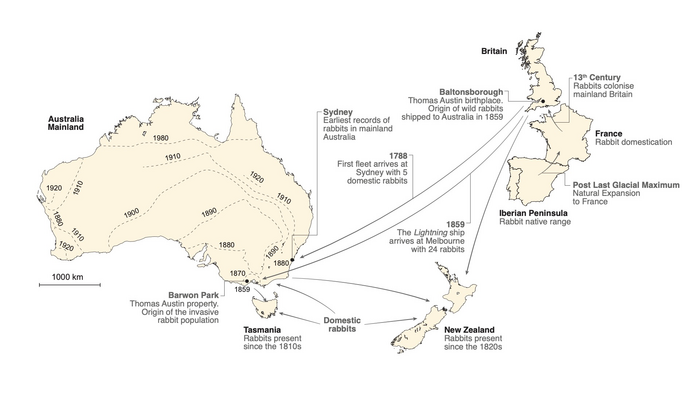 Unwillingly you came.
Ears and whiskers
torn from tunnels and huts
to give company
in stolen gardens
at the very creases
of the world.
Beneath wooden decks
you mixed and stirred,
cloistered close for relief
between the breaking,
haunting sounds
of strange and stormy seas.
Arrival brought release,
a colony of spoil
that swarmed across the land
like lightning striking twice –
your wanton occupation
a sure and certain shadow
of our own.

This poem is inspired by recent research, which has found that a single introduction of wild rabbits triggered their invasion across Australia in the 1800s.

European wild rabbits are invasive, feral pests throughout much of Australia. They have caused considerable damage to the natural environment, since being introduced to Australia by European settlers. Rabbits were first introduced to mainland Australia when five domestic animals were brought to Sydney in 1788, but it was not until the 1850s that they became truly invasive, where within 50 years, they spread out at a rate of 100 km per year, making this the fastest colonisation rate for an introduced mammal ever recorded. Despite the construction of rabbit-proof fences, the deliberate introduction of the myxoma virus, and other measures, rabbits remain one of the major invasive species in Australia threatening native flora and fauna and costing the agricultural sector an estimated $200 million per year.

In this new study, researchers have combined genomic and historical data to show that this biological invasion was likely triggered by a single introduction of rabbits into Australia in 1859, at the estate of a settler named Thomas Austin in Barwon Park, near Geelong in Victoria. A consignment of wild rabbits was caught on the family’s land in Baltonsborough in Somerset and shipped to Australia along with some domestic rabbits. These wild and domestic rabbits likely bred on the ship, and within three years, had multiplied into thousands, according to both local newspaper reports and Austin himself. The researchers also point out that if the trigger for the invasion had been environmental change, such as the development of large pastoral areas by human settlers, then multiple local rabbit populations would likely have expanded. However, the study’s genetic findings and the failure of pre-1859 rabbits to become invasive demonstrate that this was not the case. As such, this infestation event was triggered by a single introduction of rabbits into Australia, which were likely better adapted to the natural environment due to their wild ancestry. These findings also demonstrate how the genetic composition of invasive individuals can determine the success of an introduction and provide a mechanism by which multiple introductions can be required for a biological invasion.

4 thoughts on “Tracing a Plague of Rabbits”