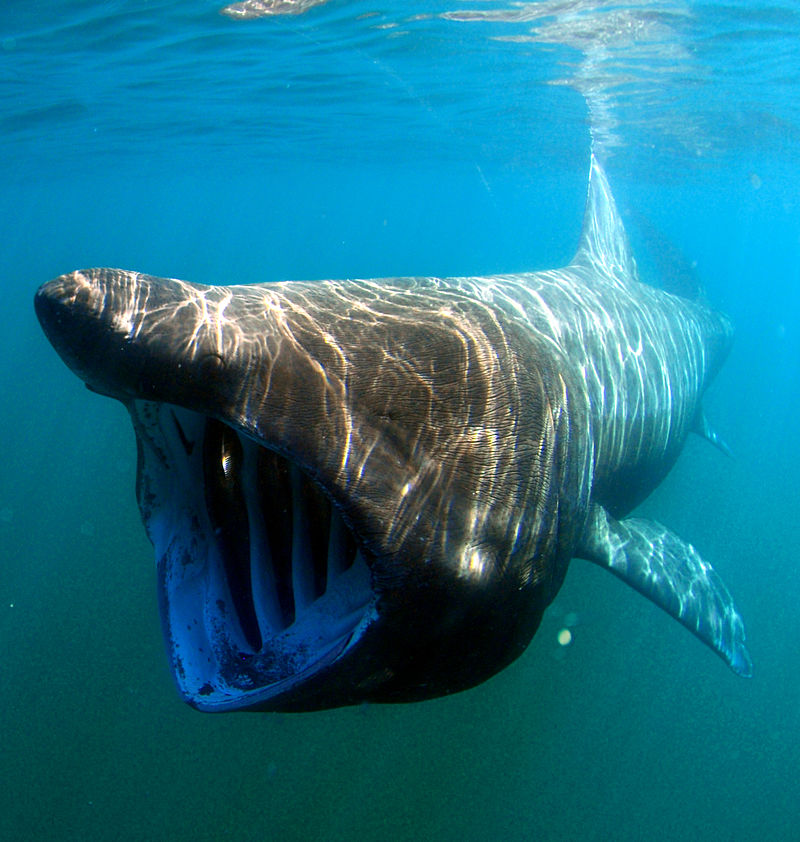 Double fins paint
zigs and zags
on saline canvas sheets,
tips and tails snaking
offshore rhymes
that converge in truth
beneath those broken,
haunted waves.
Moving mountains of the sea,
your fearsome enormity
matched only
by a magnitude
of grace:
congregations of krill
consumed with the care
of a lover’s caress.
We waved to you
from weathered skies,
blinking in the sun
to find you
never really there
at all.

This poem is inspired by recent research, which has found a sharp decline in basking shark sightings in California.

The basking shark is the second largest fish in the ocean (second only to the whale shark), with adults typically reaching up to 8 m (around 26 ft) in length. This species also has the smallest weight-for-weight brain size of any shark, reflecting its relatively passive lifestyle; for comparison their brains are about 10 cm in length. Despite their formidable size and appearance, many of the behaviours of these animals are still uncertain, as they tend to lead relatively secretive and migratory lifestyles. For example, it is not known for certain how long they live, where they mate, or where they give birth. The basking shark has also long been a commercially important fish as a source of food and animal feed, and overexploitation has resulted in the shark being classified as a vulnerable species on the IUCN Red List. Fishing for basking sharks is now prohibited in the United States, Mexico, and Canada. Yet despite these protections, sightings in the California Current Ecosystem have decreased dramatically since the mid-1900s, when basking sharks were regularly observed in their thousands each year off California’s coast.

In this new study, researchers examined systematic aerial surveys conducted by NOAA Fisheries between 1962 and 1997, using additional sources (such as fisheries data, tagging, and public observations) from between 1973 and 2018 to complement these surveys. From the records of the aerial surveys, it was found that nearly 4,000 sharks were sighted per year until the 1990s, after which no aerial sightings at all were observed. The additional sources reported less than 100 sightings of basking sharks per year after 1990, with the study also revealing that group sizes had declined from around 57 individuals per group in the 1960s to just over 3 in the last decade. The researchers also found a significant shift in when sightings occurred, from fall and spring in the early years of observations to the summer months after the 2000s. It is still unclear exactly what is driving these trends although this study found a significant link between basking shark presence and environmental factors, such as sea surface temperature, the availability of prey, and climatic effects such as El Niño. The study concludes that a lack of monitoring may also play a role in reduced sightings and that coordinating the documentation of basking shark deaths and sightings throughout the Pacific basin could be used to create more robust population estimates. However, it is clear that future research and conservation efforts are needed to help protect these giants of the ocean.

6 thoughts on “Basking No More”