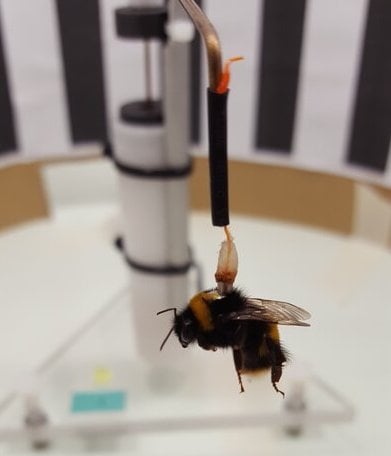 Bumbling in the breeze,
your banded body drifts
casually into view.
Flower waker, pollinator.
Every lacy step a
careful caress
across the countless faces
of your foraged design.
Flying in manufactured circles
we trace the trajectory
of your industry,
plotting each wayward beat
against the fluctuating cadence
of your body’s warmth.
A sturdy, sterile curve
charting the fragility
of our coincidence
in a world
that we must learn
to share.

This poem is inspired by recent research, which has found that the flight performance of bees is affected by temperature.

Bumblebees are a crucial insect group for the pollination of vegetables, fruit, oilseeds, legumes, and fodder crops. They are also able to fly in cooler temperatures and lower light levels than many other bees, making them excellent pollinators, especially at higher elevations and latitudes.
Like most flying insects, their flight activity depends on their body temperature. If they are too cold then their flight muscles are unable to function quickly enough to support flight, whereas if they are too warm then they can overheat. Understanding the optimum temperature for bumblebee flight is thus extremely important in terms of the impact that climate change might have on pollination and global food availability.

In this new study, researchers measured how the flight of bumblebees is determined by air temperature. They did this by temporarily attaching the bumblebees to ‘flight mills’, which allowed them to fly in circles like a carousel, where their distance and speed of flight could be measured accurately. The researchers tested the bees at temperatures ranging from 12 to 30°C, with their results revealing that performance levels peaked between 25 and 27°C. They also found that while bumblebees can fly up to 3km at their thermal optimum, this average flight distance could be reduced to under 1km when temperatures rise to 35°C. These results indicate that while bumblebees found in more northern latitudes may see benefits to flight performance under future global warming, populations in southern latitudes (where temperatures above 27°C are more readily exceeded) may be adversely affected. Further research is now needed to better understand how temperature can affect the foraging potential of bumblebees and other pollinators out in the wild.