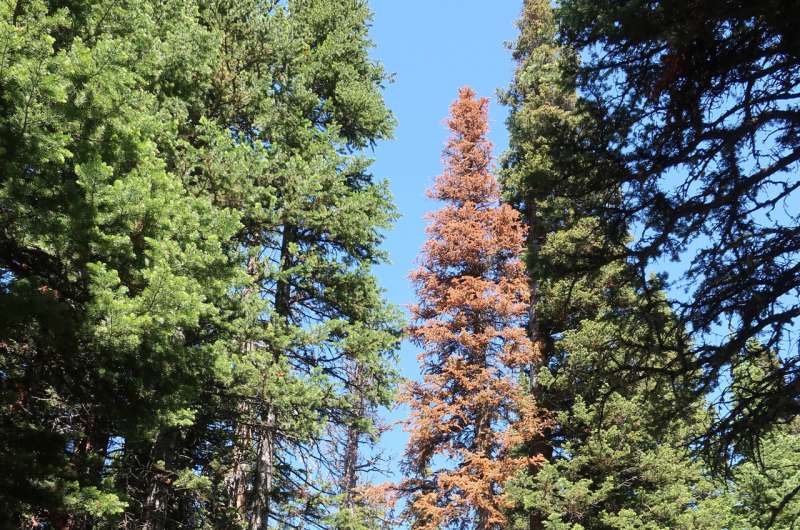 Perched below the tree line
twisted tones emerge,
groves of crooked wood
that buckle at the knee.
Lodgepole seedlings
scatter through sunlight,
drifting over seas of spruce
that shimmer in the breeze.
We count your dead
neath looming shadows
that flitter overhead.
A weathered carcass
bearing scars of passing
like a debt,
every untamed flame
and raging swarm
etched into the landscape.
We count your dead
disappearing from view,
as you fade into the background
of our mounting loss.

This poem is inspired by recent research, which has found that trees in Colorado subalpine forests are dying at increasing rates from warmer and drier summer conditions.

A subalpine forest is a conifer-dominated forest which occurs mainly in the subalpine zone of temperate latitudes. The subalpine zone itself is the zone of plants just below the tree line, i.e. the altitude above which no trees grow. A typical subalpine forest consists mostly of subalpine fir and Engelmann spruce, and in total they cover over 10,000 square miles of the state of Colorado in the United States. Since the early 1980s, researchers have been studying tree mortality in these Colorado subalpine forests, focussing on an area of more than 5,000 marked trees on Niwot Ridge just west of Boulder. These measurements have been made every three years or so, in order to identify the factors causing tree death, and previous research has shown that wildfire and bark beetle activity largely affect the mortality and health of these subalpine forests.

However, in this new study, researchers have shown that more trees died during summers with higher maximum temperatures and greater moisture deficits. In fact, they found that tree mortality in subalpine Colorado forests not affected by fire or bark beetle outbreaks has more than tripled since the 1980s. This research shows a strong relationship between higher rates of tree mortality and warmer, drier summers, implying that climate change will continue to increase the death rate of trees in subalpine forests. As trees die in increasing numbers the warmer and drier climate is also making it much less likely that new tree seedlings can establish and replace the dead adult trees, thereby vastly reducing the carbon storage potential of the forests and further exasperating the effects of human-made climate change.

2 thoughts on “The Forests are Dying”