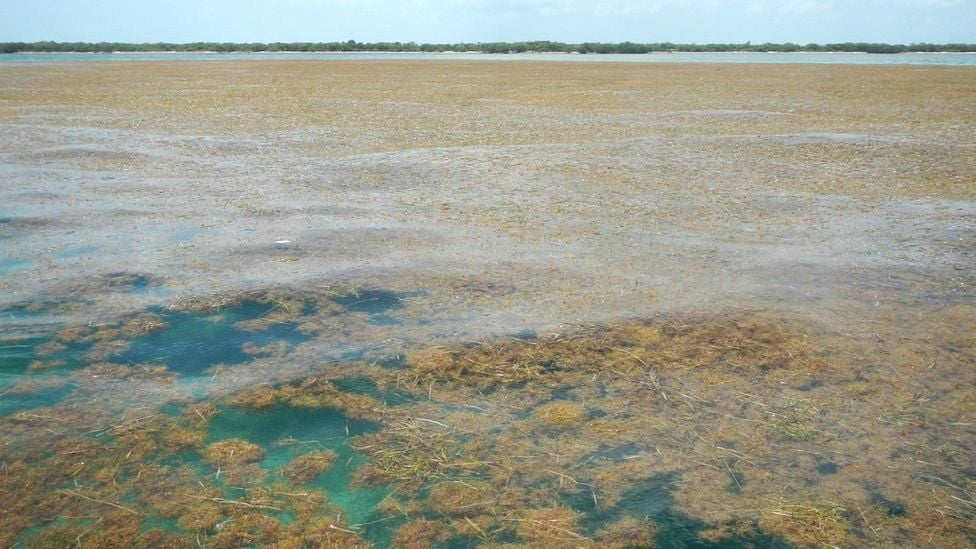 Rafts of golden brown
drift across the sea,
leafy suburbs providing
food,
refuge,
life,
for the flotsam of fish
that bathe between
your branches.
Filefish,
triggerfish,
crabs,
and shrimp
flock to your nest,
caught up in
pelagic mats
that bloom
like woolly roses
caught in wells.

Gorging on the runoff of our inseminated waste you swell to obscene proportions.
Your bloated corpse a toxic wilderness, its brackish boundlessness
a memento mori for the thoughtlessness of our excess.

This poem is inspired by recent research, which has found that excess nitrogen has made sargassum the world’s largest harmful algal bloom.

Sargassum is a genus of large brown seaweed (a type of algae) that floats in island-like masses and never attaches to the seafloor. Typically, sargassum blooms exist in low-nutrient waters off the coast of the North Atlantic, where they provide a vital nursery habitat for crabs, fish, sea turtles, and other marine species. However, tides, winds, and excess nutrients from natural and human sources can fuel massive blooms that encroach on coastal waters and deplete oxygen reserves in local ecosystems, turning these blooms into a toxic ‘dead zone.’ In recent years, sargassum blooms have gotten so big that governments have spent millions of dollars picking up the seaweed from sands and shallows of popular beaches.

To better understand how the relationship between nutrient levels and sargassum blooms has evolved over the last few decades, researchers in this study collected and analysed hundreds of sargassum samples from 2010-2019, comparing these samples to a historic baseline from the 1980s. The data showed that the sargassum’s composition has varied significantly over the last 30 years, with increases in nitrogen thought to be responsible for the biggest changes in their growth and behaviour. The production of synthetic fertiliser nitrogen has increased nine-fold since the early 1980s, while 85% of all synthetic nitrogen fertilisers have been created since 1985, suggesting that anthropogenic pollution is largely to blame for this change in the sargassum’s composition. The results of this study suggest that increased nitrogen availability from human-made sources, including sewage, is turning this critical nursery habitat into harmful algal blooms with catastrophic impacts on coastal ecosystems, economies, and human health.