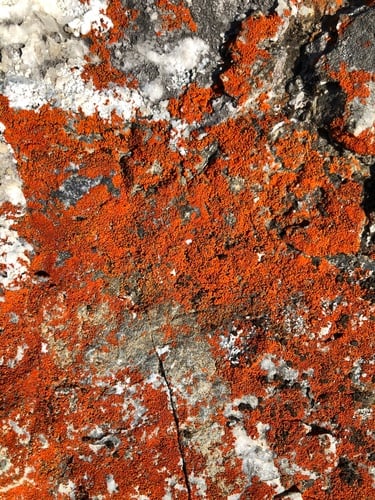 Yellows,
blues,
greens, and
silvers
dance across the
forest floor;
prismic patterns
cascading beneath
the canopy to
saturate in shades.

Ash,
ash,
ash, and
ash
settles across the
forest floor.

Silvers and greens
lost forever,
in the heat
of our embrace.

This poem is inspired by recent research, which has found that lichens may take up to a century to fully return to some ecosystems after wildfire.

Lichens are a complex life form that are actually a symbiotic partnership of two separate organisms, a fungus and an alga, existing in many colours, sizes, and forms and covering approximately 6-8% of Earth’s land surface. They are key players in a variety of environmental processes (such as regulating the infiltration of water intro dry soils), provide an important food source for some species (e.g. the North American caribou), and are also excellent indicators of pollution and climate change. In environments such as chaparral ecosystems (i.e. vegetation composed of broad-leaved evergreen shrubs, bushes, and small trees) such as those in California, the ability of lichen to retain moisture provides an essential service. As these ecosystems become more exposed to wildfires due to changes to the climate, land management practices, and population growth it is therefore essential to understand how lichen communities respond.

In this new study, researchers sampled lichen communities at two natural reserves in California: Quail Ridge and Stebbins Cold Canyon in Napa and Solano counties, respectively. They sampled lichen that existed in a range of locations where fires had been known to take place over the past 70 years, documenting every lichen species they could find as well as its abundance. They found that lichens are fire-intolerant species that may be slow to regrow in landscapes after high-severity fire, especially if different fire episodes occurred relatively closely together. The study concluded that some chaparral lichen could be lost altogether if fire intervals shorten to less than 20 years, which has already occurred in some parts of California. As such, careful land management plans that are specific to the different needs of the landscape are needed in order to enable lichen to both recover and thrive in these ecosystems.