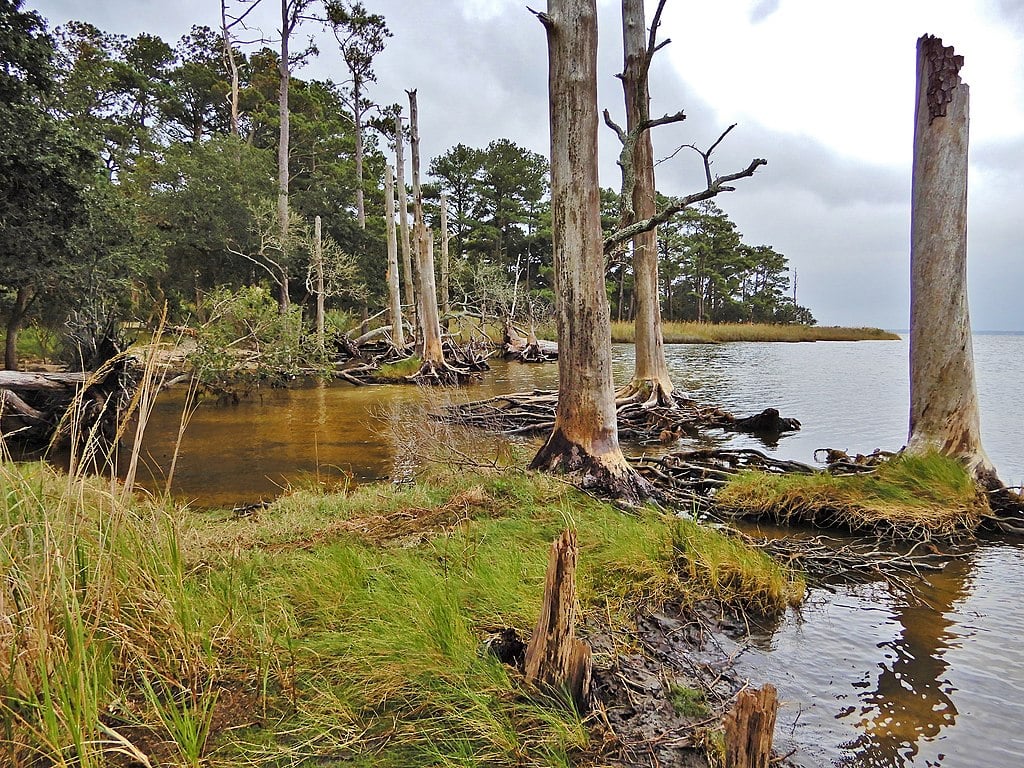 Surging seas and weeping waves
advance along your coast,
probing buried channels as they
break through the shoreface
to drag briny fingerprints
across weathered limbs
that recoil at the touch.

Tainted tides swell
with pickled poison
as saline sap pours down
your brackish bark,
below a crown of mottled grey
that withers in the drink.

This poem is inspired by recent research, which has found that sea level rise is killing trees along the Atlantic Coast, creating ‘ghost forests’ that are visible from space.

Ghost forests are landscapes that form when saltwater from the sea begins to flood woodland areas that contain freshwater-dependent trees. This saltwater slowly poisons the trees, and as they die, all that is left behind are ghostly grey and withered trunks, which can survive for decades in this dried-up barren state. Throughout the United States’ East Coast, trees are dying off as rising seas and higher storm surges brought about by climate change push saltwater farther inland. Not only are the ghost forests expanding because of climate change, but they are also likely to be making these hostile conditions worse through a climate feedback loop. Many of these coastal forests contain evergreen trees that absorb carbon dioxide almost all year-round, making them crucial carbon sinks that can lower carbon dioxide concentrations from the atmosphere. With fewer evergreen trees, less carbon is thus removed from the air, thereby amplifying the negative impacts of climate change.

In this new study, researchers focused on the Alligator River National Wildlife Refuge, North Carolina’s largest coastal wildlife refuge. By looking at over 35 years of satellite imagery it was found that between 1985 and 2019, almost 11% of all forest in the refuge transitioned to ghost forest. Of the more than 21,000 acres of ghost forest that formed during this time period, the worst of it occurred between 2011 and 2012, where the combination of a five-year drought and the impact of Hurricane Irene resulted in a 6-foot wall of seawater being pushed ashore. This storm surge swept across the Refuge, reaching in excess of 1 mile inland from the coast, and causing a huge area of ghost forest to be formed within the space of only a few months. Sadly, what is happening in North Carolina is also happening elsewhere, too. In coastal regions around the globe, exceptional rates of land cover change due to climate change are occurring, with implications for wetland function, wildlife habitat and the global carbon cycle.