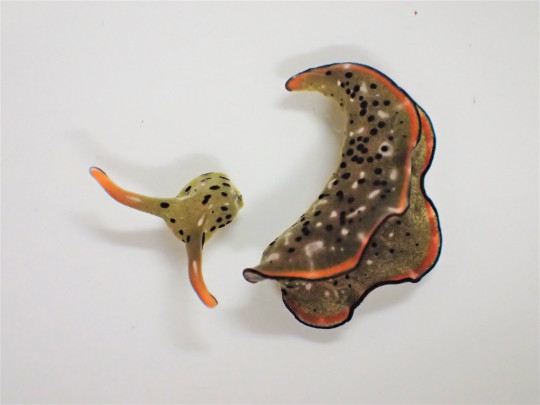 A solar powered scalp
slithers across the sea floor,
surviving on the memories
of meals consumed
when you were whole.

Your jettisoned corpse
left to wither in the solitary wake
of this self-inflicted separation.

A body abandoned,
cut loose as you cast off
your crown
towards the lone lure
of future shores.

This poem is inspired by recent research, which has discovered two new species of sea slug that can decapitate themselves and regrow their entire bodies including organs.

Autotomy (also known as self-amputation) is the ability of certain animals to intentionally separate a body part, usually as a protective evading mechanism against predators. For instance, geckos, skinks, lizards, and salamanders have the ability to shed their tail in order to avoid capture. This phenomenon is also found among many other creatures from worms and spiders through to snakes and octopuses, and typically, the body part that is shed is grown back later through regeneration. Researchers have now discovered two new species of sea slug that take this autotomy and regeneration to the extreme, as they can decapitate themselves and then regrow an entirely new body, complete with a beating heart and other vital organs.

The researchers first became aware of this behaviour when they saw a slug that they had in their laboratory slithering around without its body, and that somehow this slithering head was both alive and continuing to feed. Further observations revealed that the whole process, from shedding itself below the neck to regrowing a new body, took less than a month. Whilst the headless bodies didn’t regenerate a new head, many continued to move and/or react to being touched for several days or even months before eventually decomposing. Meanwhile, the decapitated heads started feeding on algae within hours, healing the initial decapitation wound within a day before going on to fully regenerate the rest of their bodies. The researchers believe that the heads of these sea slugs are able to survive without a digestive system by using the energy from the photosynthesis occurring in cells that they had previously gained from algae, which they had eaten before the self-decapitation. It is also thought that these sea slugs may have developed the technique as a way of getting rid of a parasite in their body. These findings represent a new type of autotomy in which animals with complex body plans shed most of their body, and further investigation is now needed to determine exactly what triggers such behaviour.