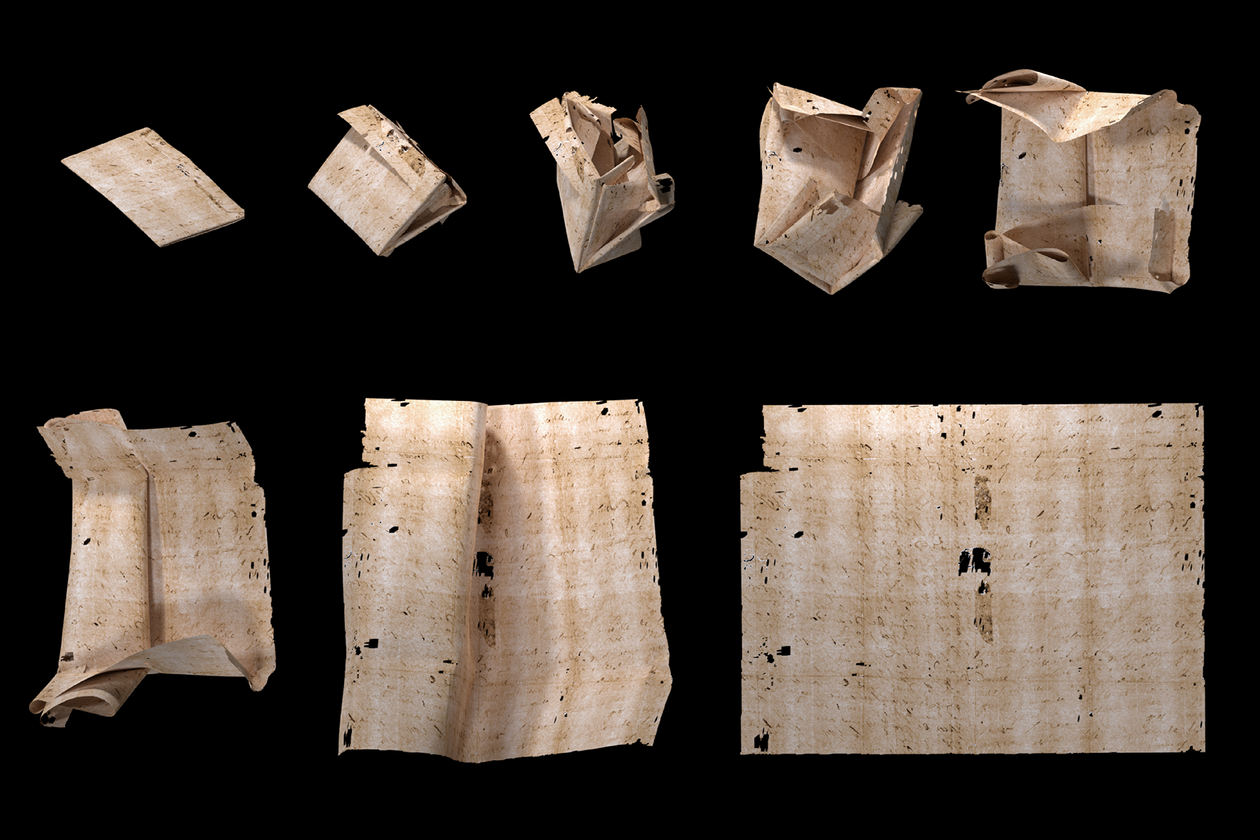 Reams of dead letters
hide correspondence
beneath purposeful
cuts and folds;
the contents of
their written past
locked tight
behind the paper-thin
veneer of this
faded piggy bank.

Radiation probes
delicately across the surface,
creating cross structures
to remind us of the pains
taken on behalf
of senders now revealed;
digitally unfurling
history’s creases
to open secrets
with seals intact.

This poem is inspired by recent research, which has used computer algorithms and an X-ray scanner designed for dental research, to read the contents of a tightly folded letter sealed since 1697, without opening it.

Letterlocking is a technique of folding a letter so that it becomes its own envelope. The letter is often secured with a wax seal and is designed so that it cannot be easily opened and resealed. In order to read the letter, the seals must be broken and/or some paper must be torn. This provided a form of security to correspondence of letters dating back to the 13th century in Western history. Letterlocking makes deciphering these letters today a very difficult process, as until now they could only be studied and read by cutting them open, often damaging the historical documents. However, in this new study, researchers have shown how an X-ray scanner used in dental research coupled with computational algorithms can be used to reconstruct and virtually unfold scans of a locked letter, without ever opening it.

In this study, a highly sensitive X-ray scanner, was used to scan a batch of unopened letters from a 17th-century postal trunk full of undelivered mail. The high sensitivity of the scanner (designed for intricately mapping the mineral content of teeth) made it possible to resolve certain types of ink in paper and parchment. Following the X-ray scanning of the letters, computational algorithms were applied to the scan images to identify and separate the different layers of the folded letter and ‘virtually unfold’ it. The letter that the researchers were able to read using this method was secured by eight folds, written in French and dated the 31st July 1697; the letter was a request from a man named Jacques Sennacques for a death certificate, addressed to Pierre le Pers, a merchant in the Netherlands. Ultimately, this virtual unfolding method will help researchers to read the contents of many more historical documents, while at the same time conserving their cultural heritage.