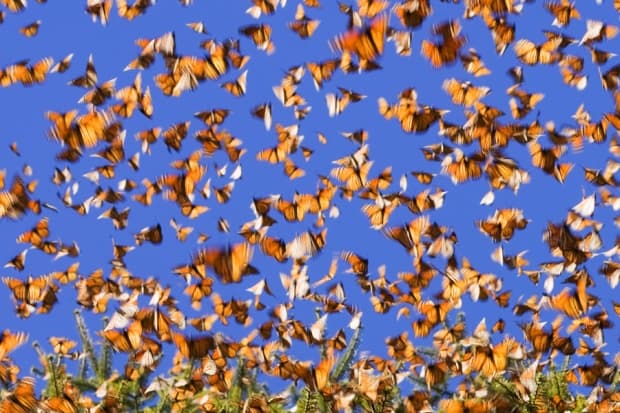 Blown on cooling winds
your paper wings
flutter in the breeze,
a murmuration
of autumn leaves
stretched across
the horizon.
Stray gusts catch
the chosen few,
buoyed to
opportunities beyond
the reach of these
familiar shores.

Buried beneath the dust
we find living testament
to your nomadic past,
burnished rustlings
that no longer fought
to free you from home.
A shrunken brilliance
at peace with the
abundance of these
peculiar shores.

Tenderly we
drag you back,
a changeling
returned
on wings now
ill-equipped
to lift you
from these
forgotten shores.

This poem is inspired by recent research, which has found that the wing size of the monarch butterfly has evolved in response to their migration habits.

The monarch butterfly is one of the most recognisable and well-studied butterflies on the planet. They have two sets of wings and a wingspan of 7-10 cm, with colourings that are a deep orange with black borders and veins, and white spots along the edges. They are perhaps most famous for their seasonal migration in North America, when millions of the butterflies fly south for the winter from the northern United States and Canada to California and Mexico. However, they have more recently become established in the tropical Americas and on Atlantic and Pacific Islands.

Whether the spread of the butterflies was purposeful, or they were simply blown there by storms isn’t clear, but by looking at over 6,000 archived and wild specimens from 1856 to the present day, researchers have revealed evolutionary changes in the wings of those butterflies that have settled in these regions, and which no longer migrate. The records reveal that whilst bigger wings aided the butterflies’ initial migration, those populations that settled in these regions soon saw their wings reduce in size, with reductions in forewing size and elongation being observed in comparison to the migrating species. In order to test if these changes were influenced by an individual’s genetic material (as a migrating or non-migrating butterfly), or as a result of environmental factors when they first hatched, the researchers reared over 1,000 monarch butterflies from six populations around the world. By taking the eggs of non-migrating populations (such as those found in Hawaii, Australia, and Puerto Rico) and hatching them alongside native (and migrating) monarch butterflies in California, it was found that the non-migrating butterflies retained their smaller wings, demonstrating that the main cause of this shrinking wingspan was genetic and not environmental. As well as documenting how migration-associated traits may be favoured when a species spreads to new areas but disfavoured when they cease seasonal migration, this research further highlights the value of museum collections for conducting contemporary scientific research.