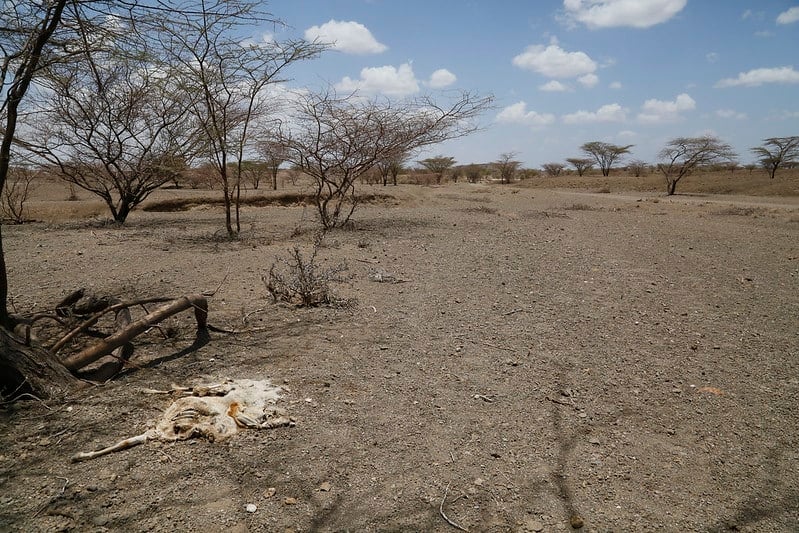 Ghostly quilts of verdant fields
shimmer in the braying heat,
picked bare by arid gusts
that rattle through the landscape
with malicious intent;
a rank, distorted echo
of where life once flowed.

The condition of vegetation
now exposed,
as it jostles for space
on weathered bulletins
that proclaim your arrival with
the efficacy of
a belated funeral wreath;
well-meant sympathies,
lost on arrival.

We train machines so that
we will not forget;
Gaussian processes cutting
through space and time
to forecast a future
that we cannot
hope to change,
but for which we can plan
to expect.

This poem is inspired by recent research, which has used satellite imagery to predict a period of drought in Kenya up to ten weeks in advance.

Droughts are a recurring hazard in sub-Saharan Africa, causing huge amounts of damage, destruction, and death amongst animal and human populations. Early warning systems are therefore vital in order to help alleviate the damage that they can cause. However, current early warning systems tend to monitor current events rather than forecast future indicators of drought. This means that organisations such as the Kenyan National Drought Management Authority (NDMA), are often only able to intervene when the impacts of such extreme weather have already begun to affect the livelihood of local people.

The Vegetation Condition Index (VCI) is an indicator that is based on satellite imagery and which is often used to identify drought conditions, albeit once the drought has already started to occur. However, by monitoring past and present values of the VCI and combining it with a machine learning approach, new research has shown how the trends and general behaviour of the VCI can be monitored over time and used to predict what may happen in the future. Such an approach can be used to forecast the state of an area’s vegetation up to ten weeks ahead with very good confidence, thereby enabling potential red flags for drought to be identified. These new methods can identify deteriorating vegetation condition sufficiently in advance to help the NDMA, as well as other disaster risk managers and humanitarian organisations such as the Kenya Red Cross, to make decisions early to support vulnerable communities and limit the impact of a drought hazard.