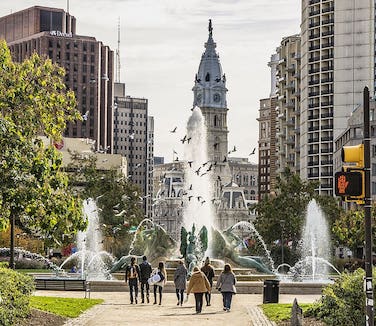 Smothered beneath a sombre blanket

of white lines and greying skies,

eyes desensitised to your jaded complexion

as our lives play out in stilted monochrome.

Suffocating outside the sureness

of your emerald embrace,

we wilt in the heat, our voices

muffled by the deafening absence

of your hushed serenity.

Shuffling in solitude, our gaze turns

in servitude to the sidewalk;

Oblivious to the canopy

that once stretched above,

to catch us when we dreamt to fly.

This poem is inspired by recent research, which has found that increasing the canopy coverage of trees in cities could help to save lives.

Tree canopy refers to the layer of tree leaves, branches, and stems that provide tree coverage of the ground when viewed from above. Previous research has suggested that increasing the amount of tree canopy in urban environments will lead to healthier and longer lives for the people who live there. In order to better quantify some of these quality of life improvements, researchers working in Philadelphia conducted a greenspace health impact assessment to estimate the annual premature mortality rate associated with projected changes in tree canopy cover.

Current tree canopy in Philadelphia ranges from 2-88%, with an average of 20% urban tree canopy coverage across the city. By estimating the number of preventable deaths based on physical activity, air pollution, noise, heat, and a range of other factors, the researchers found that if Philadelphia were able to increase its canopy cover by 10% (to a total of 30% average cover), then this would result in approximately 400 premature deaths being prevented across the city on an annual basis, including around 250 premature deaths in areas of lower socioeconomic status. In addition to highlighting environmental justice, it is clear that urban greening programmes provide one solution through which to promote public health and decrease health inequalities.