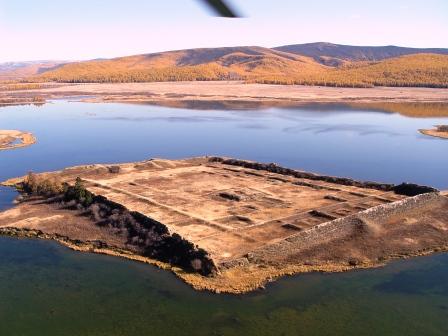 too coarse to expose the

folly of your foundation;

panning for timelines that slip

of our weathered chronology.

we count off the years,

bypassing the infestations and

other anomalies that seek

to mask the perfect replication

of your ringed history,

until lodged between two

the interstellar interference that

casts off your loamy veil,

A monument as fleeting

as the season’s breath

on which you once lingered.

This poem is inspired by recent research, which has used radiocarbon dating techniques to unravel the mystery of Por-Bajin, a medieval ruin in the Russian republic of Tuva in Southern Siberia.

The large archaeological site Por-Bajin (literally translated into English as Clay House), sits on an island in the middle of Tere-Khol Lake, and whilst it was first excavated in 1891, researchers have since been unable to identify exactly who built it, or for what purpose. Traditional radiocarbon dating was able to pinpoint the date of its construction to around the year 750, give or take a decade or two. However, since the khans, the leaders who ruled that region during this period, tended to do so for a very short space of time during the eighth century, the exact construction date was needed in order to link Por-Bajin to a specific leader, and thus the likely reasons for its construction.

Carbon-14 (a radioactive isotope of carbon, in which the nucleus has 6 protons and 8 neutrons) is created in the upper atmosphere and finds its way into plants and trees when they absorb atmospheric carbon dioxide as part of photosynthesis. The atmospheric concentrations of carbon-14 are not constant but tend to vary by only a small amount on a year-by-year basis. However, recent research discovered an increase of 1.2% in the concentration of carbon-14 isotope in tree rings dated to the year 775, a spike of about 20 times the normal background rate of variation. Scientists are unsure as to exactly what caused this spike in atmospheric carbon-14, but one hypothesis is that it was caused by an extreme solar flare event from our sun or a high-energy gamma ray burst. Given that this spike is so easily identifiable, it can be used to specifically date a tree that was alive during this period, by first finding the spike (and thus the ring corresponding to the year 775), and then counting the rings (each of which typically represent one year of growth) from there. By adopting this method researchers were able to precisely date the trees used in the construction of Por-Bajin as being felled in the year 777, during which time Tengri Bögü Khan was in charge. Bögü Khan had converted to Manichaeism, a Persian religion that was strongly opposed in that region at the time, and which ultimately led to Bögü Khan being killed during an anti-Manichaean rebellion in the year 779. This new evidence, coupled with previous archaeological observations that the complex was almost unused, points to the likelihood that Por-Bajin was originally built to serve as a Manichaean monastery; if it instead had been a palace or a fortress, it is more likely that the anti-Manichaeans would have occupied it, rather than leave it to ruin.

2 thoughts on “Unearthing the Clay House”