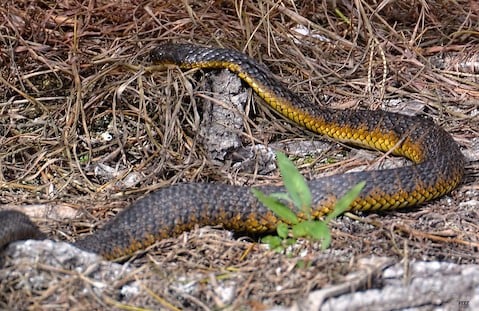 Carved from the swamps,

we dredged your home to

make way for our own;

squaring the deal with

painting our castoffs in

a technicolour of toxicity that

leached across the landscape.

Slithering through the sediment

your yellowed bellies contort with pain;

gorged on the entrails

that were once born benign

in the coal mines of the plains.

This poem is inspired by recent research, which has found the accumulation of heavy metals in the livers of tiger snakes to be indicative of wider environmental damage to wetland areas.

Many toxic heavy metals (such as copper, lead, and mercury) exist naturally in low concentrations, in the sediment of wetlands and their surrounding rocks. However, as wetlands are usually situated at low points in the landscape, a lot of urban pollution also ends up there, leading to an accumulation of these pollutants. Exposure to such contaminants can have a range of impacts on the health and behaviour of animals, including poorer health conditions, shorter lifespans, and ultimately, local extinction. Furthermore, the higher up the food chain an animal is the higher its dose of these contaminants, with these metals increasing at each level of the chain via a process known as bioaccumulation (defined as when an organism absorbs a substance at a rate faster than that at which the substance is lost, e.g. through excretion).

Tiger snakes are a top predator in a wetland environment, and as such they are susceptible to bioaccumulating large quantities of heavy metals, primarily through their consumption of frogs, which themselves are very sensitive to these contaminants. In this new study, researchers found that the livers of tiger snakes living in the wetlands of the Swan Coastal Plain in Perth, Western Australia, contained high levels of toxic heavy metals. In particular, snakes tested from Herdsman Lake (Perth’s most urbanised wetland area, in the north western suburbs of the city), were found to have the highest concentration of the heavy metal molybdenum ever reported in a terrestrial reptile, anywhere in the world. Furthermore, sediment samples taken from some of the wetland sites were found to have amounts of arsenic, lead, mercury, and selenium that exceed current government guidelines. As well as highlighting the current toxic levels in these wetland areas this research also demonstrates how snakes are a good bioindicator of wetland contamination, highlighting their role as an important indicator of environmental health.

6 thoughts on “A Snake in the Wetlands”