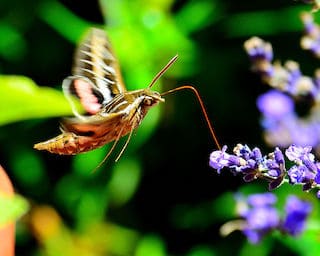 two moths shimmer in the starlight;

as they flicker across the cool embrace

their earthy tones glimmer in the gloom;

bellies sticky with the latent gratitude

Timidly, they retreat into the light,

their labours veiled by night’s curtain

as we wait for the dawn.

This poem is inspired by recent research, which has shown that moths play an important role as pollen transporters in English farmland.

Pollination is needed for plants to reproduce, and so many plants depend on bees or other insects as pollinators. When an insect collects nectar and pollen from the flower of a plant, some pollen from the stamens—the male reproductive organ of the flower—sticks to its body. When the insect visits the next flower, some of this pollen is rubbed off onto the stigma, or tip of the pistil—the female reproductive organ of the flower. When this happens, fertilization is possible, and a fruit, carrying seeds, can develop. While bumblebees and honeybees are known to be super pollinators, they also preferentially target the most prolific nectar and pollen sources. Moths may appear to be less effective at pollinating than bees, but their high diversity and abundance make them critical to pollination in ways that are only just being understood.

Nocturnal moths complement the work of daytime pollinators, helping to keep plant populations diverse and abundant. Furthermore, this pollen transport occurs most frequently on the moth’s ventral thorax (or chest), rather than on the proboscis (or tongue), allowing it to be more easily transferred to other plants. As well as their role as pollinators, moths play a vital role in maintaining biodiversity, and without them many more plant species and animals, such as birds and bats that rely on them for food, would be at risk. Moth populations are currently experiencing steep declines across the globe, highlighting the urgent need to include them in future management and conservation strategies, as well as further research to better understand their role as pollinators, including their currently unknown role in crop pollination.