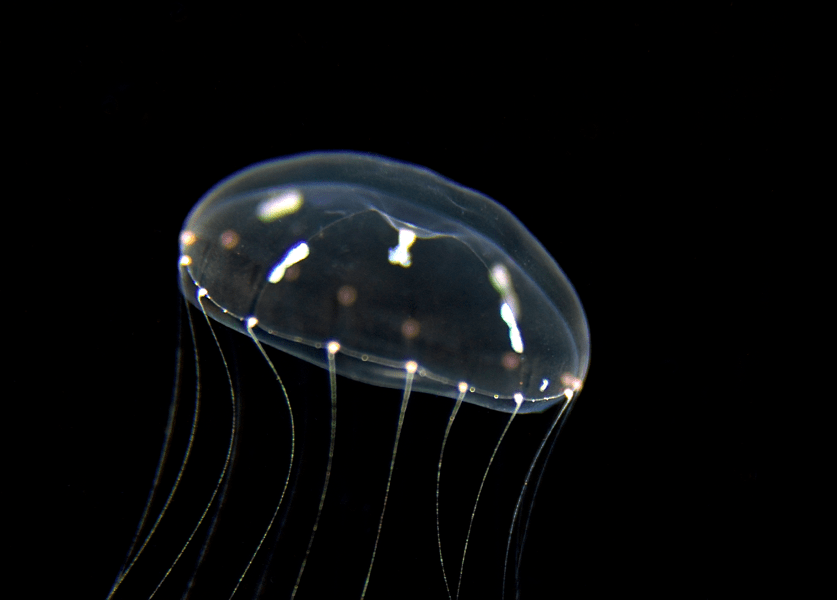 A quorum of gonads

sparkling beneath the waves,

Rising to meet the dawn,

Receptors blush at the

gall of the rising sun,

This poem is inspired by recent research, which has used jellyfish to help understand how sexual reproduction in animals may have evolved.

Clytia hemisphaerica is a small marine jellyfish, about 1 cm in diameter, that is found in the Mediterranean Sea and the North-East Atlantic Ocean. In Clytia, the formation of mature eggs from immature egg cells (or oocytes) is triggered every morning by the release of maturation-inducing hormones (MIHs). These MIHs are released by the Clytia when it is stimulated by the first light of dawn, and whilst previous studies have identified this hormone, the corresponding protein receptors (which are responsible for initiating different physiological responses such as egg release) have remained unknown. The identification of such receptors (in addition to the MIHs) are necessary for understanding how sexual reproduction is regulated in these jellyfish.

In this new study, researchers began this identification process by first narrowing their search down to 16 different G-protein coupled receptors (GPCRs) – a special type of protein receptors that are made in the oocytes of the Clytia. After identifying these 16 possible candidates they then used a synthetic MIH to determine which of them responded most effectively to the hormones, thereby identifying the most likely receptor, which they then termed the Maturation Inducing Hormone Receptor. The discovery of this receptor provides insight into the critical process that transforms animal oocytes into eggs, and may in turn reveal important steps in the evolution of the hormone systems that regulate sexual reproduction in other animals.