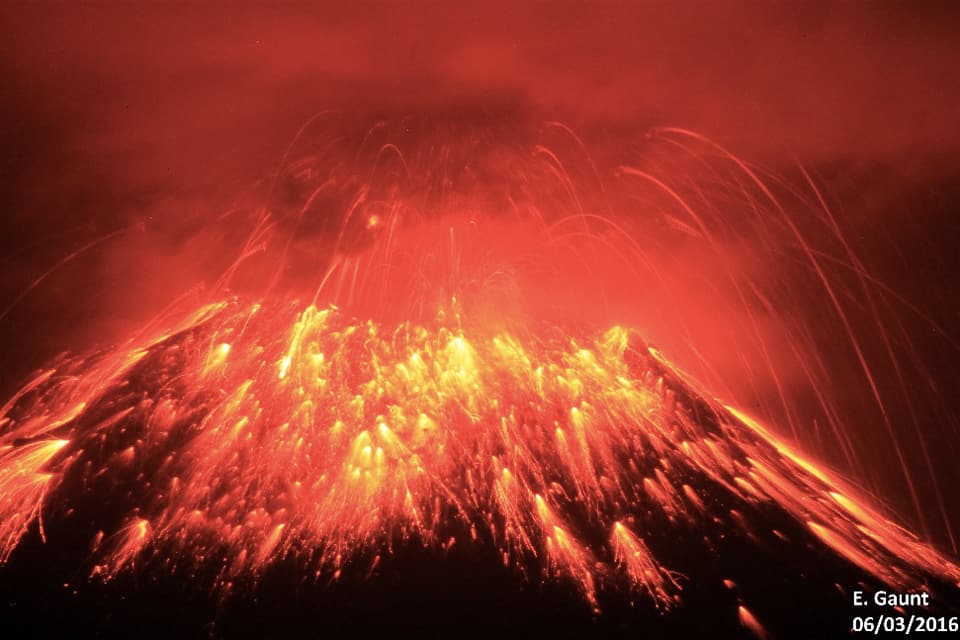 The Earth has set the sky ablaze

with glorious hues of orange.

from the Throat of Fire with

biblical intent as they race

An ancient scar starts to throb,

as beneath its surface a

of ash threaten to break

free from their swollen,

The deformed shadow of

This poem is inspired by recent research, which has found that one of South America’s most prominent volcanoes has shown signs of possible flank instability.

Tungurahua, is an active volcano located in the Andes of central Ecuador, and is known locally as ‘The Black Giant’. The volcano has been frequently active since 1999, leading to the evacuation of 25,000 people from nearby communities. The volcano also has a long history of flank collapse, in which the side (or flank) of the volcano collapses due to an instability. Such events are amongst the largest and most destructive processes on Earth, leading to extremely large landslides that form avalanches of rock that may travel outwards for large distances, destroying all in their path.

A previous eruption of Tungurahua, around 3,000 years ago, caused a prior, partial collapse of the west flank of the volcano. Since then, the volcano has steadily regrown, now peaking with a steep-sided cone more than 5000 m in height. However, the new west flank, above the site of the 3000-year-old collapse, has shown repeated signs of rapid deformation. This new research uses satellite data to show how such a deformation has likely been caused by shallow, temporary magma storage beneath the west flank. If this localised increase to the magma supply is continued, then the sheer volume can promote a new instability of the west flank and its potential collapse. It is therefore invaluable that Tungurahua is being continuously monitored by the Instituto Geofísico.